SONET stands for Synchronous Optical Network. SONET is a communication protocol, developed by Bellcore – that is used to transmit a large amount of data over relatively large distances using optical fibre. With SONET, multiple digital data streams are transferred at the same time over the optical fibre.

Why SONET is called a Synchronous Network?
A single clock (Primary Reference Clock, PRC) handles the timing of transmission of signals & equipments across the entire network. 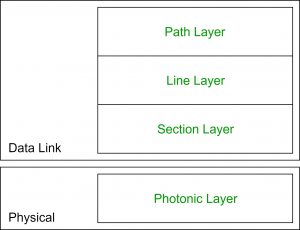