Synchronization by using Semaphore in Python

In Lock and RLock, at a time only one Thread is allowed to execute but sometimes our requirement is to execute a particular number of Threads at a time.

Suppose we have to allow at a time 10 members to access the Database and only 4 members are allowed to access Network Connection. To handle such types of requirements we can not use Lock and RLock concept and here we should go for Semaphore. Semaphore can be used to limit the access to the shared resources with limited capacity. It is an advanced part of synchronization.

Create an object of Semaphore:

Here ‘count’ is the number of Threads allowed to access simultaneously. The default value of count is 1.

Way to create an object of Semaphore :

In this case, by default value of the count variable is 1 due to which only one thread is allowed to access. It is exactly the same as the Lock concept.

In this case, a Semaphore object can be accessed by n Threads at a time. The remaining Threads have to wait until releasing the semaphore. 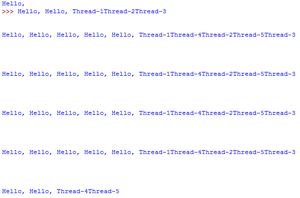