Strontium is a reactive metal that is naturally available. It is denoted with Sr. It is a silvery metal with pale yellow tint. Strontium is so similar to calcium; hence it is integrated in the bone. Synthetic strontium is radioactive and is dangerous to human body. Whereas natural strontium is stable and is not hazardous to health. During 19th century, strontium was mainly used in the sugar production. Nitrate is an inorganic compound which has one nitrogen(N) atom and three oxygen(O) atoms. The chemical formula of nitrate is NO3–. Nitrate is a primary component used in fertilizers and explosives. It is also used as food additive.
Nitrogen is a nonmetallic chemical element. It’s atomic number is 7. It is most common element in universe. Nitrogen is present in human body by 3% by mass. It is mainly used in making fertilisers and in agriculture. It is also used in making explosives.
Oxygen is a highly reactive nonmetal with atomic number 8. It is colourless and odourless and most abundant element of earth. Oxygen is used in textile and plastic industries, submarines and space flights etc.

Strontium nitrate is an inorganic compound made out of the components strontium, nitrogen and oxygen with the formula Sr(NO3)2. This solid is a white crystalline, odorless substance. It is utilized as a red colorant and oxidizer in fireworks and crackers. It is an inorganic compound composed of strontium, nitrogen and oxygen. The chemical formula of this compound is Sr(NO3)2. For writing the chemical formula, Strontium Sr+2 (ionic charge 2+), Nitrate (NO3)1- (ionic charge 1–). As the ionic charge should balance, we need two nitrate ions, so after balancing , the formula becomes Sr(NO3)2. 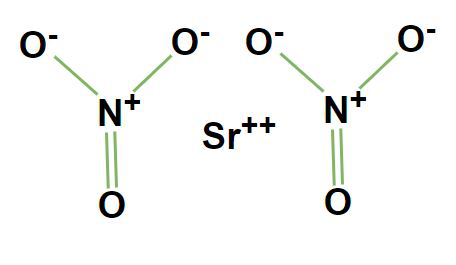 Uses and applications of strontium nitrate

Question 1: What are the warnings things to know about strontium Nitrate?

Question 2: What happens when strontium nitrate reacts with sodium carbonate?

Strontium carbonate is formed as a precipitate .Sodium nitrate is also formed but remains in aqueous form. The chemical reaction is as follows.

Question 3: How is strontium nitrate prepared?

Question 4: Why is strontium not found in pure form in nature?

It is highly reactive in nature. It readily reacts with water and oxygen. It reacts extremely to air so it is stored to avoid contact with water and air. Strontium if present in finely powdered form, it quickly catches fire. So it is never found in pure form.

Question 5: What happens when strontium  nitrate is heated?

Toxic nitrogen oxides are emitted. Explosion may take place if it is exposed to heat for long time. The thermal decomposition reaction is as follows,

Question 6: Where are nitrates found?

As nitrite quickly oxidizes to nitrate, nitrate is found in soil, ground and surface waters. They are also found in food (vegetables, fruits and processed metal). They are found in meat, including diary products, fish. High nitrate levels in drinking water may cause serious health issues.

Aqueous nitric acid is added to strontium carbonate to form Strontium Nitrate. Carbon dioxide is also emitted in the result. The chemical reaction is as follows,