The substance that can change its form under an external force is defined as fluid. Whenever an external force is applied to a fluid, it begins to flow. The study of fluids in motion is defined as fluid dynamics. Have you ever noticed a creek flowing beneath the bridge? When you see a streamline, what is the first thing that comes to mind? The most typical qualities of the stream, such as speed, width, and the volume of water flowing, are the answer. The flow of any fluid is one of the most important properties. The location or source of a stream is a significant factor that determines the flow of water within it. The stream’s source site has the potential to alter both the speed and the direction of flow within the stream.

Another key aspect influencing the stream’s flow is the physical presence of an object in the stream. The object in the stream determines the direction and speed of the flowing water. The velocity of a liquid’s stream flow is its most important feature. As a result of the foregoing qualities, water can be classified as either streamline or laminar flow or turbulent flow.

The fluid can flow in various types; it can be understood by the example of tap water. The water coming from a tap has a smooth appearance while the flow rate is low, but voids and disruptions appear at a certain point when the flow rate is increased.

If one add a stream of ink when the flow is constant, the ink flows without mixing with the other layers, but if one introduce it when the flow is turbulent, the ink layer mix with the other layers of water, as seen in the image below. The first type, referred to as the streamline or laminar flow, will be discussed in this section. And the other is the turbulent flow which will be discussed later. 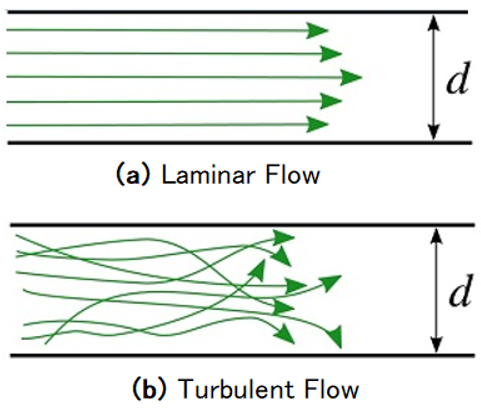 Streamline flow in fluids is described as a flow in which the fluids flow in parallel layers with no interruption or mixing of the layers and the velocity of each fluid particle passing by remains constant over time at a particular position.

There are no turbulent velocity variations at low fluid velocities, and the fluid tends to flow without lateral mixing. The fluid particles move in a specific order with regard to the particles traveling in a straight line parallel to the pipe wall so that the contiguous layers slide past each other like playing cards.

The path traveled by fluid particles under steady flow circumstances is defined as a streamline. The tangent at any point on the curve reveals the direction of the fluid velocity at that moment if the flow lines are represented as curves. The curves, as shown in the figure below, indicate how the fluid particles move in relation to time.

The curve represents the flow of the fluid particles in a steady state. This map is time-stationary, which means that every particle passing a point behaves precisely like the particle that came before it. 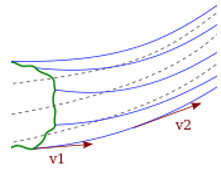 In a laminar flow, the streamlines follow the equation of continuity. i.e.,

where A is the fluid flow’s cross-sectional area and v is the fluid’s velocity at that location.

The term Av is defined as the fluid’s volume flux or flow rate, which is constant in a steady flow.

Then by the equation of continuity:

This represents the inverse relationship between area and velocity. The velocity of the liquid decreases as the cross-section area increases, and vice versa.

Moreover, the flow of the water can also be determined by the quantity named Reynold’s number that determines whether a flow pattern is laminar or turbulent which is discussed below:

The formula for the Reynolds number is given as:

Following are the important points for the fluid flow and the Reynolds number:

Problem 1: On which theorem is the continuity equation based?

The flow of the fluid is assumed to be incompressible, laminar and non-viscous for using the continuity equation. The continuity equation is based on the conservation of mass. The product of area and velocity gives the volume flow rate of fluid. Since, the density of fluid is same at all points, the mass of fluid passing through two different regions is same at the same time.

According to the equation of continuity, the velocity at B will be the same as that at A since the area of the cross-section is the same at both points. Although, gravity will increase its velocity, but pressure will also decrease downwards and therefore net effect will be zero change in velocity.

Let us consider the unknown velocity be v2.

According to continuity equation,

Substitute all the values in the above expression.

Thus, the velocity of water at a point of second cross-section is 6.25 m/s.

The type of flow can be determined by the value of Reynolds number.

The formula of Reynolds number is given as:

Substitute all the values in the formula to calculate the Reynolds number.

Since, the Reynolds number is less than 2000, therefore the flow of liquid is laminar.

The direction of net velocity of the flow is given by the tangent at a point to the streamline.

My Personal Notes arrow_drop_up
Previous
Generate an array with K positive numbers such that arr[i] is either -1 or 1 and sum of the array is positive
Next
How to run two async functions forever - Python
Recommended Articles
Page :
Mass Flow Rate Formula
08, May 22
Flow Rate Formula
20, May 22
Accounting Equation | Increase in Assets and Capitals both and Increase in Assets and Liability both
22, Jun 22
Accounting Equation | Decrease in Assets and Capital both and Decrease in Asset and Liability both
21, Jun 22
Animal Kingdom - Definition, Types, Characteristics, Examples
21, Jun 22
Sole Proprietorship: Features, Merits and Demerits
20, Jun 22
What is an Online Transaction?
20, Jun 22
Operating Profit (EBIT): Meaning, Formula and Example
20, Jun 22
Where Does Photosynthesis Take Place?
20, Jun 22
Difference Between Beer’s Law and Lambert’s Law
20, Jun 22
Plant Growth and Development
20, Jun 22
Difference between Rectilinear motion and Linear motion
20, Jun 22
Article Contributed By :