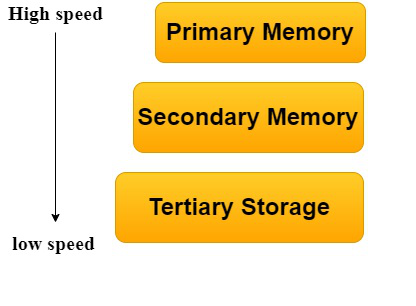 A computer system has a hierarchy of memory. Direct access to a CPU’s main memory and inbuilt registers is available. Accessing the main memory takes less time than running a CPU. Cache memory is introduced to minimize this difference in speed. Data that is most frequently accessed by the CPU resides in cache memory, which provides the fastest access time to data. Fastest-accessing memory is the most expensive. Although large storage devices are slower and less expensive than CPU registers and cache memory, they can store a greater amount of data.

Magnetic Disks: Present-day computer systems use hard disk drives as secondary storage devices. Magnetic disks store information using the concept of magnetism. Metal disks are coated with magnetizable material to create hard disks. Spindles hold these disks vertically. As the read/write head moves between the disks, it de-magnetizes or magnetizes the spots under it. There are two magnetized spots: 0 (zero) and 1 (one). Formatted hard disks store data efficiently by storing them in a defined order. The hard disk plate is divided into many concentric circles, called tracks. Each track contains a number of sectors. Data on a hard disk is typically stored in sectors of 512 bytes.