Sterilization is an effective method or a process used to kill all the vegetative spores and disease-causing microorganisms. Sterilization deactivates microorganisms including bacteria, spores, fungi, and unicellular and other biological agents which are present in food products or on any certain surface of the object. Sterilization can be achieved by various methods and sources including heat, chemicals, radiation, gases, and filtration. Sterilization is making a substance liberated from all microorganisms both in vegetative and sporing states. Spore is a regenerative structure that is adjusted for dispersal and surviving for expanded timeframes in horrible circumstances. Spore’s structure is part of the lifecycles of numerous microscopic organisms, plants, green growth, parasites, and some protozoa. For the greatest ideal, the Steam process is utilized where the temperature is high and strain can be observed giving for check of sterilization. Elevated degrees of sterilization can be accomplished by utilizing the Steam Sterilization methodology, and the steam sterilizer or autoclave is the most widely recognized piece of instrument utilized in labs and medical clinics. 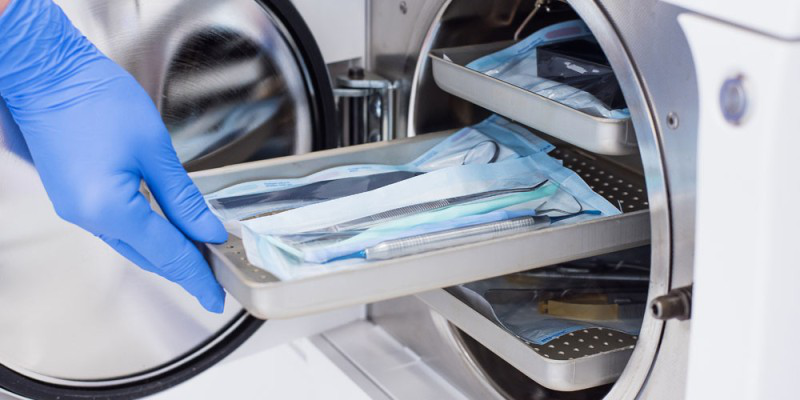 Sterilization is defined as the process of destruction or elimination of all pathogenic microorganisms and organisms capable of giving rise to infection such as all spores, bacteria, fungi, etc., all disease-causing. It can be achieved by both physical, chemical, and other effective methods that inhibit growth or are free from food products, fluids, objects, solid materials, food packaging materials, raw materials, and other different products.

There are many different methods that are effective to achieve the sterilization process. They are

The most effective and reliable method of the sterilization process. There are two methods by using heat-dry heat and moist heat.

Moist heat can be categorized into 3 groups:

Filtration assists with eliminating microorganisms from heat-labile fluids such as sera and solutions of antibiotics. Its working principle as viruses go through the normal filter channels, filtration can be used to obtain bacteria-free filtrates of clinical samples for virus isolation.

Types of gases used for sterilization are:

In the medical industry and surgeries

Normally all the surgical instruments and medications that are used for the treatments undergo contact with the aseptic part of the body. Therefore, they must be sterile. Examples of such instruments are scalpels, hypodermic needles, and artificial pacemakers.

Most clinical and surgical devices used in medical facilities are made of materials that can go under steam sterilization. Ethylene oxide gas has been used since the 1950s for heat- and moisture-sensitive medical devices. In the last few years, a number of various new, low-temperature sterilization systems have been developed and are being utilized to sterilize medical instruments.

Many research facilities, laboratories, and their instruments are mainly dependent on the effective sterilization process.

The father of food science – ‘Nicolas Appert’ introduced modern methods using the sterilization process. He found that the application of heat over a long period slowed down the deterioration of foods and various fluids by preserving them for safe consumption over an overtime period. Canning of foods works on a similar principle and it helped to reduce food poisoning and disease-causing microorganisms. Food irradiation and high-pressure methods using steam are also used in the food industries.

The preparations of vaccines and other biological products are dependent on the sterilization process. To sterilize certain heat-liable enzyme preparations, antibiotics, and other drugs.

A huge number of instruments utilized on shuttle can’t endure exceptionally high temperatures, so strategies not needing extreme temperatures are utilized as endured, including warming no less than 120°C, chemical sterilization, oxidization, ultraviolet, and irradiation.

Question 1: What are the factors that influence sterilization by heat?

The factors influencing sterilization by heat are:

Question 2: What is TDT?

The term TDT indicates – ‘Thermal Death Time’. Thermal death time is defined as the minimum time required to kill a suspension of organisms at a predetermined temperature in a specified environment. TDT is inversely proportional to temperature. Thermal death time is increased in presence of organic substances, proteins, nucleic acid, starch, gelatin, sugar, fats, and oils.

Question 3: What are the factors that determine the type of sterilization?

The factors that determine the type of sterilization or disinfecting process are:

Question 4: How do determine the potential of Ideal antiseptics or disinfectants?

They should be effective against all microorganisms. The concentration of the solution is active in presence of organic matter substance. The time of action of the disinfectant and how effective acid and alkaline media are, the pH of the medium. It should have faster action, temperature, and nature of the organisms during usage. It should have a high penetrating power. It should be compatible with other antiseptics and disinfectants. It should not corrode metals and not cause local irritation, non-toxic and inexpensive, easily available.

Question 5: What are the different types of steam sterilizers?

There are several types of steam sterilizers that are presently used. They are:

Question 6: What are spores?

A spore is a regenerative structure that is adjusted for dispersal and surviving for expanded time periods in horrible circumstances. Spore’s structure is part of the lifecycles of numerous microscopic organisms, plants, green growth, parasites, and some protozoa. They are not easily killable. Pasteurization and other heat treatments cannot affect the state of spores. it can only be easily achieved by the process of sterilization.