Split the Dataset into the Training & Test Set in R

In this article, we are going to see how to Splitting the dataset into the training and test sets using R Programming Language.

The sampling method has the following documentation in R :

The following code snippet illustrates the procedure where first the dataset matrix is created. 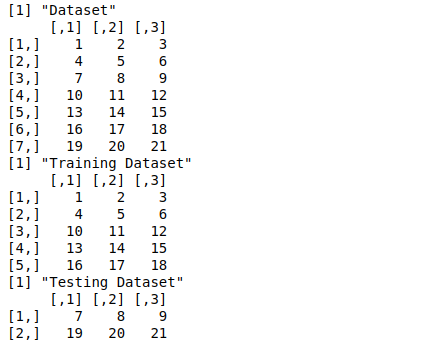 The dplyr package in R is used to perform data manipulations and operations. It can be loaded and installed into the R working space using the following command :

A data frame is first created using the data.frame method in R. The sample_frac method of the dplyr package is then applied using the piping operator. The sample_frac() method in this package is used to select random sample from the input data set. It is used to select the specified percentage of items from the input dataset. The training dataset can be created using this method. It has the following syntax :

In order to create the testing dataset, the anti_join() method of this package can be used which is used to select the rows from the main input dataset that do not lie in the dataset specified as the second argument. As a result, both the datasets will be disjoint in nature. The method has the following syntax : 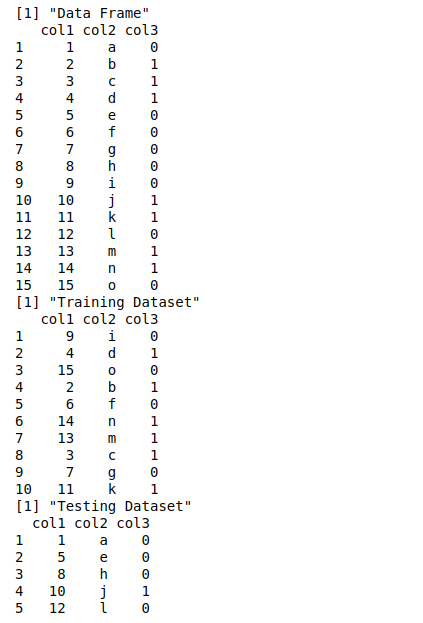 The sample.split method in catools package can be used to divide the input dataset into training and testing components respectively. It divides the specified vector into the pre-defined fixed ratio which is given as the second argument of the method.

This method creates a boolean vector with the number of entries equivalent to the vector length specified. The subset of the main input dataset can then be extracted using the sample vector and the subset method in this package. Now the training dataset can be accessed using the following syntax :

The training and testing datasets can be created using the subset() method respectively.

Previous
How to select a subset of DataFrame in R
Next
Min, Max and Mean of Off-Diagonal Elements in a Matrix in R
Related Articles
1. Applying User-defined Functions on Factor Levels of Dataset in R Programming - by() Function
2. Get the summary of dataset in R using Dply
3. How to Fit a Gamma Distribution to a Dataset in R
4. How to create 3D plot for iris flower dataset with rgl package in R?
5. Split DataFrame into Custom Bins in R
6. Divide the Data into Groups in R Programming - split() function
7. Split large R Dataframe into list of smaller Dataframes
8. Split Date-Time column into Date and Time variables in R
9. Split Vector into Chunks in R
10. Split DataFrame Variable into Multiple Columns in R
Article Contributed By :