Solanaceae place among developed species and some others, like potato, pepper, and tomato, play a deciding job in the human eating routine and the economy of the nations. Others are generally developed as fancy plants or for modern and drug purposes. Infection sicknesses have a genuine and, surprisingly, horrendous effect and could in fact challenge these harvests in both mild and equatorial areas. This present circumstance isn’t well-defined for Solanaceae or infections, and the creation of most harvest plants is restricted by different microbes. A few cases have added to making developed establishes more powerless than unconstrained greenery and, in any case, spreading them out of their nations of beginning in various environments.

The fundamental Solanaceae are presently developed on all mainlands, and their normal development mode has been changed misleadingly. They have been chosen to deliver perpetually, which has broken their physiological equilibrium and made them more powerless to go after by microorganisms, including infections. The specialization and artificialization of yields and even assortments have made enormous, homogeneous areas of plentiful hosts for infections and their vectors.

Numerous infections can be falsely immunized with tomatoes, and more than 100 normally happen on this plant in the different creation regions. Each of these infections is connected to a bigger or more modest number of hosts. Tomato is the Solanaceae generally impacted by infections. It is now and again went after by a few infections immediately, for instance, in France, with Cucumber mosaic infection (CMV) and PVY and in the United States with ToMV and PVX.

Characters of a family Solanaceae 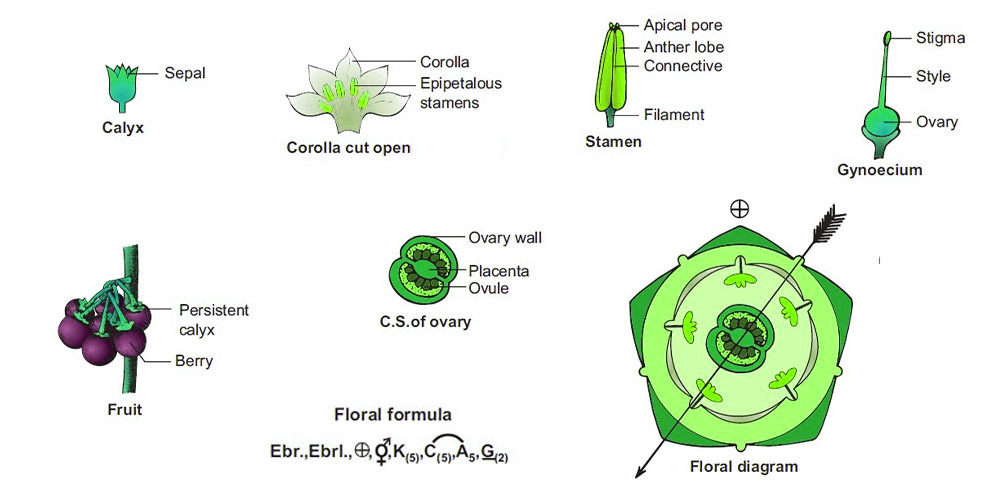 Importance of Solanaceae as Medicines

The monetary significance of the Solanaceae family is additionally dominating, being used for drugs. The individuals have significant applications as prescriptions.

Question 1: Give some economic importance to Solanaceae family members as medicines?

Some of the Solanaceae family members that are used as medicines include Atropa belladonna in plasters and tinctures, Datura stramonium for the treatment of Parkinson’s disease and in treatment of asthma, and Nicotiana tabacum which produces nicotine.

The plant Capsicum annum is used to produce chili powder, as it is an important spice in India.

Question 3: Which Solanaceae family members are popularly used as foods?

Question 4: What are the highlights of the family Solanaceae?

Question 5: What is the economical importance of the Solanaceae family?

Economic Importance of Solanaceae- The family solanaceae contributes a few significant food, medication and decorative plants to the human race. Henceforth this family is viewed as monetarily significant. Solanum species: Solanum tuberosum is most significant food crop after cereals.