Visual Testing is also called Visual UI Testing. It validates whether the developed software user interface (UI) is compatible with the user’s view. It ensures that the developed web design is correctly following the spaces, sizes, shapes, and positions of UI elements. It also ensures that the elements are working properly with various devices and browsers. Visual testing validates how multiple devices, browsers, operating systems, etc., affect the software.

This article focuses on discussing each of these topics-

Let’s start discussing each of these topics in detail.

Visual tests generate, compare and analyze browser snapshots to detect if any pixels have changed. These pixel’s differences are called visual pixels. 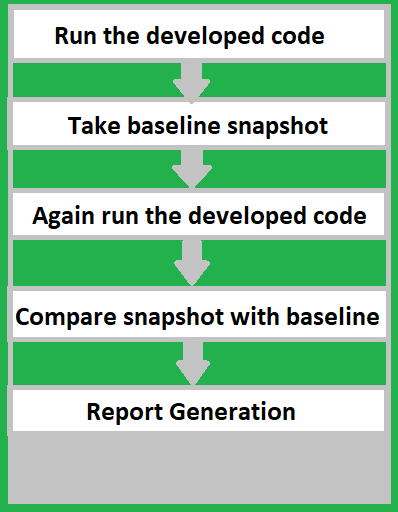 Some visual testing tools will generate reports where the differences in the snapshots are captured. It finds where actually the snapshots get differed. Also, it generates the report for successful test results.

Visual testing is done because visual errors happen more frequently than one might realize. Some of the reasons for doing visual testing are-

Below are some of the methods for Visual testing:

1. Create dedicated visual tests: In this, the tester will write the test cases for different scenarios. Here, moderate efforts of writing test cases will only be required. Writing the test cases from scratch is important and it needs some significant time to write the accurate test cases.

3. Insert Implicit Visual Validation to the Existing Testing Framework: This method is very easy to implement as it requires only a few lines of code. However, it suffers from the limitation that one can also do generic validation in this case. One can’t validate specific components in the framework.

Below are the two types of visual testing:

1. Manual Visual Testing: In manual visual testing, the tester will manually check the layout and user interface elements on the web page. Here, the tester has to manually take the snapshots or screenshots to compare these snapshots with the baseline snapshots to detect the differences and confirm them to the team.

Another effective way to do manual testing is to use a component explorer. In this, you the tester define the test states, use explorer to select a state and component, and check it on the screen. One such tool is React Storybook where one can develop UI components in isolation. Through this method, a tester can run a manual test of a component, check how it renders, and see if it is working fine or not.

2. Automated Visual Testing: Automated visual testing is a way to automatically verify if a user interface visually appears as intended. The benefits of automating visual tests are that they offer long term cost efficiency and these are faster than manual tests and more accurate as they can exclude human errors and deliver pixel-perfect visual tests, they are reusable and transparent as they offer automatic reports that are easily and readily accessible by anyone in the team.

The following are some of the tools for automated visual testing: