The Test strategy document is a high-level document that outlines the testing technique used in the Software Development Life Cycle and confirms the test kinds or levels that will be performed on the product. One can’t change the test strategy once it’s been written, and it’s been accepted by the Project Manager and development team.

In addition, the test strategy provides the following details, which are required while writing the test document:

To put it another way, it’s a document that explains the process of product evaluation. And the approaches can be developed using the following factors:

On the basis of the development design papers, we may write the test strategy.

The following documents are included in the development design document:

Here, we will discuss the following points:

Components of a Test Strategy

The test effort, test domain, test setups, and test tools used to verify and validate a set of functions are all outlined in a Test Strategy. It also includes schedules, resource allocations, and employee utilization information. This data is essential for the test team (Test) to be as structured and efficient as possible. A Test Strategy differs from a Test Plan, which is a document that gathers and organizes test cases by functional areas and/or types of testing in a format that can be presented to other teams and/or customers. Both are critical components of the Quality Assurance process since they aid in communicating the breadth of the test method and ensuring test coverage while increasing the testing effort’s efficiency.

The following are the components of the test strategy: 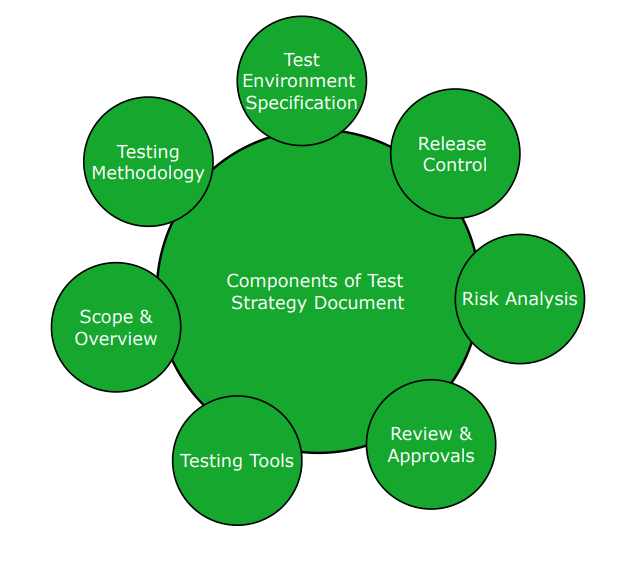 Let’s discuss each of these in detail.

2. Testing Methodology: Testing methodology is the next module in the test strategy document, and it is used to specify the degrees of testing, testing procedures, roles, and duties of all team members. The change management process, which includes the modification request submission, pattern to be utilized, and activity to manage the request, is also included in the testing strategy. Above all, if the test plan document is not properly established, it may result in future errors or blunders. This module is used to specify the following information-

4. Testing Tools: Testing tools are an important part of the test strategy document since it contains all of the information on the test management and automation tools that are required for test execution. The necessary approaches and tools for security, performance, and load testing are dictated by the details of the open-source or commercial tool and the number of users it can support.

5. Release Control: Release Control is a crucial component of the test strategy document. It’s used to make sure that test execution and release management strategies are established in a systematic way. It specifies the following information-

6. Risk Analysis: Risk Analysis is the next section of the test strategy paper. All potential hazards associated with the project are described in the test strategy document and can become an issue during test execution. Furthermore, a defined strategy is established for inclining these risks in order to ensure that they are carried out appropriately. If the development team is confronted with these hazards in real-time, we establish a contingency plan. Make a list of all the potential dangers. Provide a detailed plan to manage these risks, as well as a backup plan in case the hazards materialize.

When all of the testing activities are stated in the test strategy document, it is evaluated by the persons that are involved, such as:

Starting the document with the right date, approver name, comment, and summary of the reviewed modifications should be followed.

It should also be evaluated and updated on a regular basis as the testing procedure improves.

Below are the differences between Test Strategy and Test Plan:

The following are the different types of test strategies:

The following factors may influence the test approach selection: