Active software projects are constantly changing – pages are being redesigned, user information is changing, and new functionality is being added. For it to work overtime, testers must make a constant effort to update the documents to match the new product. This can take a long time to test. Another challenge is that written tests are often designed to test the same thing over and over again, using the same steps and the same data each time testing. This means that if there are any bugs lying outside the guides provided in the test script, they will not be found unless the tester strays from the script. Written tests do not always encourage testers to use the intelligence and technical skills needed to detect hidden bugs. Here, we will discuss the following points:

What is a Test Script?

Test Scripts are a line-by-line description that contains information about system functions that must be performed to verify an application or system under test. The test document should outline each step to be taken with the expected results. This automated script enables the software explorer to scan each level of a wide range of devices systematically. The test script should contain the entries to be included, as well as the expected results. The automated Scripts can be written using any programming language (C/C++/Python/Perl/ Batch Scripts).

The following are some of the approaches used by the tester to write test scripts:

Below is a sample Batch File to run web browsing:

How Efficient Should a Test Script Be?

Here are some important tips for creating a test script:

Although different test engineers will have different preferences regarding style, structure, and content of the text, compliance with the guidelines set by automated testing experts can be considered as a guide. Test documents should have the following properties:

A good script is always backed up with really useful information. The purpose of the script is what the text does or the actions we do. Potential information includes the following:

When to Use Test Script

Below are the differences between test script and test case:

Example: Suppose let’s say the task is to validate a file is JSON or not in a list of files. We can write a test script to check the same.

Output 2- File to check is not entered 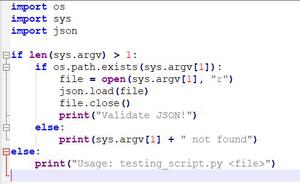