Boundary Value Analysis is based on testing the boundary values of valid and invalid partitions. The behavior at the edge of the equivalence partition is more likely to be incorrect than the behavior within the partition, so boundaries are an area where testing is likely to yield defects.

Example: Consider a system that accepts ages from 18 to 56.

Valid Test cases: Valid test cases for the above can be any value entered greater than 17 and less than 57.

Invalid Testcases: When any value less than 18 and greater than 56 is entered.

Problem: Consider a Program for determining the Previous Data.

Solution: Taking the year as a Single Fault Assumption i.e. year will be having values varying from 1900 to 2000 and others will have nominal values.

Taking Day as Single Fault Assumption i.e. Day will be having values varying from 1 to 31 and others will have nominal values.

Taking Month as Single Fault Assumption i.e. Month will be having values varying from 1 to 12 and others will have nominal values.

For the n variable to be checked Maximum of 4n + 1 test case will be required. Therefore, for n = 3, the maximum test cases are-

The focus of BVA: BVA focuses on the input variable of the function. Let’s define two variables X1 and X2, where X1 lies between a and b and X2 lies between c and d. 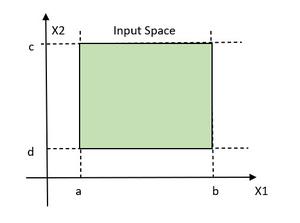 The idea and motivation behind BVA are that errors tend to occur near the extremes of the variables. The defect on the boundary value can be the result of countless possibilities.

Typing of Languages: BVA is not suitable for free-form languages such as COBOL and FORTRAN, These languages are known as weakly typed languages. This can be useful and can cause bugs also.

PASCAL, ADA is the strongly typed language that requires all constants or variables defined with an associated data type.

It is a type of black-box testing that can be applied to all levels of software testing. In this technique, input data are divided into the equivalent partitions that can be used to derive test cases-

Example: Below is the example to combine Equivalence Partitioning and Boundary Value.

Why Combine Equivalence Partitioning and Boundary Analysis Testing: Following are some of the reasons why to combine the two approaches: