Prerequisite – Jelinski Moranda software reliability model
The Schick-Wolverton (S-W) model is a modification to the J-M model. It is similar to the J-M model except that it further assumes that the failure rate at the ith time interval increases with time ti since the last debugging. In the model, the program failure rate function between the (i-1)th and the ith failure can be expressed as

and N are the same as that defined in the J-M model and ti is the test time since the (i-1)th failure.

The pdf(probability distribution function) of

can be obtained as follows:

Hence, the software reliability function is

We now wish to estimate N assuming that

is given. Using the MLE method, the log likelihood function is given by,

Taking the first derivative with respect to N, we have,

Therefore, the MLE of N can be obtained by solving the following equation:

Next, we assume that both N and ? are unknown. Hence we obtain,

Therefore, the MLEs of N and

can be found by solving the two equations simultaneously as follows: 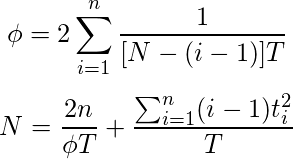