The Goel-Okumoto model (also called as exponential NHPP model) is based on the following assumptions:

This is shown in the following differential equation:

where a is the expected total number of faults that exist in the software before testing and b is the failure detection rate or the failure intensity of a fault.

This model is known as the Goel-Okumoto model

For Type-I data, the estimate of parameters a and b of the Goel-Okumoto model using the MLE method can be obtained by solving the following equations simultaneously:

Similarly, for Type-II data, the estimate of parameters a and b using the MLE
method can be obtained by solving the following equations: 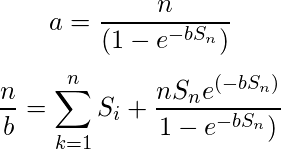 be the MLE of parameters a and b, respectively. We can then obtain the MLE of the mean value function (MVF) and the reliability function as follows:

It is of interest to determine the variability of the number of failures at time t, N(t). One can approximately obtain the confidence intervals for N(t) based on the Poisson distribution as