Sodium is a chemical element with the atomic number 11 and the symbol Na (from Latin natrium). It’s a delicate, silvery-white metal with high reactivity. Sodium belongs to the periodic table’s group 1 as an alkali metal. It only has one stable isotope, 23Na. The free metal isn’t found in nature, thus it has to be made from compounds. Sodium is the sixth most prevalent element in the Earth’s crust, and it may be found in feldspars, sodalite, and rock salt, among other minerals (NaCl). Many sodium salts are very water-soluble: sodium ions have been leached from the Earth’s minerals by the action of water overages, and sodium and chlorine are the most prevalent dissolved elements in the seas by weight.

The inorganic compound sodium fluoride has the chemical formula of NaF. It’s utilised in trace quantities in drinking water fluoridation, toothpaste, and metallurgy. When sodium fluoride solutions are employed with hard water, calcium and magnesium fluoride insoluble compounds can develop. It’s a dry chemical that’s used to fluoridate drinking water, and it has to be manually weighed and added to the mixing tank. Villiaumite, a mineral form of NaF, is somewhat uncommon. It has been discovered in plutonic nepheline syenite rocks. It is slightly soluble in HF and ammonia but not in alcohol, acetone, SO2 and dimethylformamide.

The formula of Sodium Fluoride is made up of one fluoride anion (F–) and one sodium cation (Na+). Therefore, it has the molecular or chemical formula NaF. It has a molecular mass of 41.98 g/mol and crystallizes in a cubic motif, similar to sodium chloride, with both Na+ and F- occupying octahedral coordination sites; however, its lattice spacing, at 462 pm, is somewhat less than sodium chlorides. 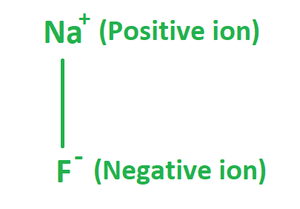 Question 1. What is the process for the preparation of Sodium Fluoride?

Question 2. Why was sodium fluoride used as a stomach poison for plant-feeding insects?

Inorganic fluorides, such as fluorosilicates and sodium fluoride, form magnesium fluorophosphate when they combine with magnesium ions. They stop enzymes like enolase from using Mg2+ as a prosthetic group. As a result, fluoride poisoning hinders the transfer of phosphate in oxidative metabolism. This acts as a poison for insects as they are not able to get the desired stuff from plant and die in the process.

Question 3. What is the use of sodium fluoride in the field of dentistry?

Cavity prevention is accomplished with sodium fluoride. This keeps the teeth healthier and more resistant to decay-causing acids and germs. It is also used for the treatment of osteoporosis and otospongiosis in adults but its use is controversial and further studies are expected. Fluoride salts are often added to municipal drinking water (and, in certain countries, to certain food products) in order to preserve tooth health. Fluoride strengthens teeth by causing fluorapatite, a naturally occurring component of tooth enamel, to develop.

Question 4. Briefly explain how sodium fluoride is toxic to the human body.

The aqueous solutions of sodium fluoride are promptly and extensively absorbed by the human body. Electron transport and calcium metabolism are both hampered by these substances. Fluoride salts or hydrofluoric acid taken in large amounts might cause deadly arrhythmias owing to significant hypocalcemia. Chronic overabsorption can result in bone hardening, ligament calcification, and plaque deposition on teeth. Eyes, skin, and nasal membranes can be irritated or corroded by fluoride. Sodium fluoride is classed as toxic by both inhalation (of dusts or aerosols) and ingestion. It has been demonstrated to damage the heart and circulatory system in high enough concentrations.

Question 5. How fluoride is obtained and what is its function in the human body?

Fluoride is a substance found in all natural water sources across the planet. This, like iron and calcium, dissolves into groundwater, on which we rely for drinking water.

It is required in the human body for the preservation and solidification of our bones, as well as the prevention of tooth disease. Most typically it is used to treat teeth plaque, a moderate type of gum disease (gingivitis), and weak and brittle bones (osteoporosis).