Sodium, along with lithium and potassium, is an alkali metal. Its main claim to fame is that it is one of the two ingredients in table salt. When sodium binds with chlorine, we get sodium chloride (NaCl). It is also used as a fertilizer salt. Sodium is the most significant alkaline metal in terms of commercial value since it is a reactive, soft metal with a low melting point. Sodium hydroxide is formed when sodium reacts rapidly with water, snow, and ice.

Sodium acetate is a chemical compound that consists of one sodium (Na) atom, two oxygen (O) atoms, two carbon (C) atoms, and three hydrogen (H) atoms. It is a sodium salt of acetic acid, sodium acetate anhydrous (i.e., lacking hydration water), or sodium ethanoate. It is hygroscopic and easily soluble in water and alcohol. It is normally odorless, but when heated until breakdown occurs, it smells like vinegar or acetic acid.  An ester can be formed by combining sodium acetate with an alkyl halide such as bromoethane.

The chemical Formula of sodium acetate is CH3COONa 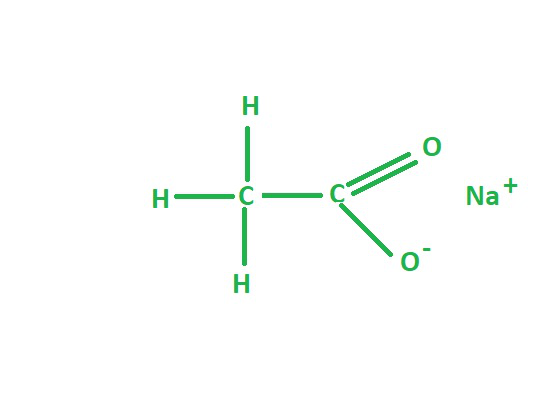 The reaction of vinegar (5-8 percent acetic acid) with sodium carbonate produces sodium acetate (NaHCO3). Carbonic acid is generated in this reaction, which is then decomposed by heating to produce carbon dioxide and water.

Sodium acetate is produced industrially by reacting acetic acid with sodium hydroxide in an aqueous solution.

Yes, sodium acetate dissolves efficiently in water. As the temperature rises, so does the solubility of this chemical in water.

Question 2: How is sodium acetate made?

The reaction of acetic acid (usually used in the form of vinegar) and sodium carbonate can produce sodium acetate (usually used in the form of washing soda). In this reaction, sodium bicarbonate (commonly known as baking soda) or sodium hydroxide (also known as caustic soda) can be used instead of sodium carbonate. This compound is synthesised industrially by reacting acetic acid with sodium hydroxide in the presence of water (which functions as a solvent).

Question 3: Is sodium acetate a potent base?

Sodium acetate (CH3COONa) is a solid-state salt that cannot be utilised as an acid or base in anhydrous or liquid form. The resultant solution is fundamental in nature, as NaOH is a strong base and CH3COOH is a weak acid. As a result, sodium acetate is required in an aqueous medium.

In molecular biology, sodium acetate is a commonly used reagent. It is used as a buffer in the buffering range of pH 3.6 – 5.6 in conjunction with acetic acid. In the purification and precipitation of the nucleic acids,sodium acetate is used.

Question 6: What happens when you mix sodium acetate with water?