All the living organisms on earth are grouped together according to their similarities, dissimilarities and phylogenetic order. The scientific method of arranging organisms into different groups and subgroups is known as biological classification. Classification of organisms is important as it helps in identifying new organisms. The study of every organism is not possible so they are divided into separate groups and selective organisms of the group are studied which gives sufficient information about the group. A better understanding of relationships among different groups of organisms.

Based on the system of classification, all organisms are classified into the following kingdom system.

Unicellular, colonial eukaryotic organisms are mostly placed under the kingdom Protista. They form plankton and are mostly found in aquatic ecosystems. They contain membrane-bound cell organelle, Nucleus is well defined that is surrounded by a nuclear membrane. They can move using both cilia and flagella made of tubulin. Respiration can be both aerobic and anaerobic, and the mode of reproduction can be both Sexual and Asexual. Mode of nutrition can be photosynthetic, saprophytic, parasitic or holozoic. A photosynthetic protist is a link between plants and animals. Genetic material consists of 2 or more DNA molecules. They are divided into Chrysophytes, Dinoflagellates, Euglenoids, Protozoans and Slime moulds. 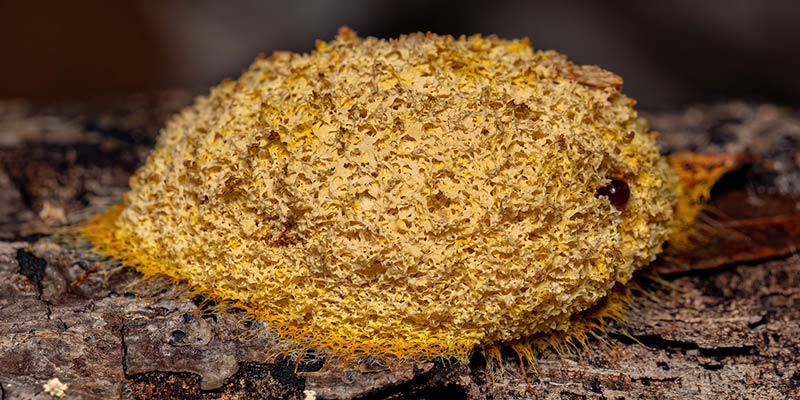 Slime moulds were previously classified under fungi, but later they were placed in the kingdom Protista with other small multicellular and unicellular eukaryotic organisms. The name ‘slime’ comes from the gelatinous or jelly-like appearance of macroscopic slime moulds. They are found in different sizes varying from a few centimetres to several square meters. They are saprophytic and feed on dead and decaying organic matter. When there is abundant food, they can live as single-celled organisms, primarily cellular slime moulds. When food is in short supply, these organisms merge together and start moving as a single body. Acellular or plasmodial slime moulds form aggregates under unfavourable conditions.

In modern taxonomy, the true slime moulds fall under Mycetozoa. Slime moulds are categorized under the Protista kingdom. They also resemble fungi and protozoa. They are further classified into several different classes.

The reproduction in slime moulds is of primitive type. The nuclei present in the plasmodia contain two sets of chromosomes. When this organism is exposed to the sunlight, the plasmodium forms a short stalk with a minute mushroom-like cap. the nuclei in the stalks undergo meiosis and chromosomes are reshuffled and the nucleus divide forming spores that are haploid (i.e. just one set of chromosome). These fruiting bodies are called sporangia.

Forming these spore capsules is deadly for slime moulds causing the end of the organism but these spores are spread with the help of wind and germinate in damp places. The spores hatch into an amoeba and propagate by engulfing the bacteria around them, they further reproduce by dividing into two mitotically. The amoeba is actually gametes or sex cells. Mostly there are two types of gametes, one is big and immovable and the other is small with flagella for movement. But in this case, slime moulds have similar types of gametes with the same size and shape, this is called isogamy.

When two amoebae with compatible mating cells meet, their gametes merge and their nuclei fuse. After fusion, the nuclei go from haploid to diploid. After this process, the nucleus stops dividing and the cell expands and forms a new plasmodium. 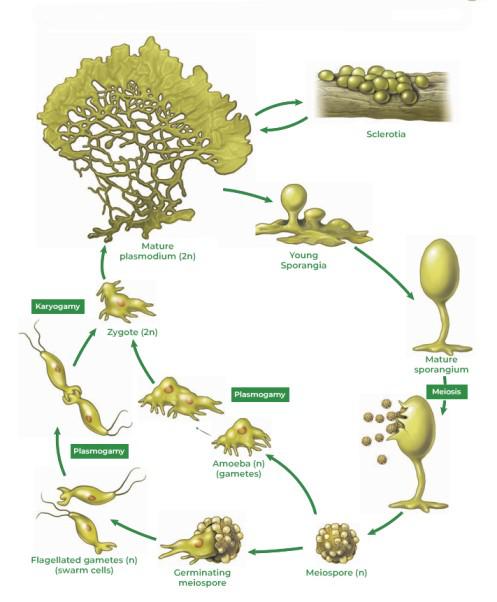 Sporangia are present on drying plasmodium which forms the stalked fruiting bodies. Through meiosis haploid spores are formed in sporangia by meiosis. A thick cell wall is present and is resistant to adverse conditions extremely. The spores germinate to form haploid cells under favourable conditions. These haploid cells act as a gamete. Depending on the availability of moisture, different cell kinds are developed. Such haploid gametes fuse to form a diploid zygote. As the plasmodium doesn’t undergo cytoplasmic division (cytokinesis), it develops the diploid zygote that undergoes multiple mitotic divisions producing multinucleated plasmodium.

Question 2: Give a few examples of cellular and acellular slime moulds

Question 3: What are slime moulds?

They are simple organisms that contain an acellular mass of gelatinous protoplasm containing nuclei in it. After reaching a particular size it forms a large number of spore cases. They are named after their gelatinous and slimy appearance.

They are usually found in places where decaying leaves, twigs, logs of wood and other decaying material are present. They grow in damp places rich in decomposing vegetation matter. Also found in the forest areas and during rainy seasons. These moulds also occur in humus containing the upper layer of damp soil.

Question 5: What is the significance of Slime moulds?

Mostly they feed on microorganisms that live on any type of dead plant and animals matter. They greatly contribute to the decomposition of dead remains of plants and animals. They act as biological decomposers and recyclers of nutrients in the food web. They consume bacteria, yeasts and fungi as food.