Neural networks also known as neural nets is a type of algorithm in machine learning and artificial intelligence that works the same as the human brain operates. The artificial neurons in the neural network depict the same behavior of neurons in the human brain. Neural networks are used in risk analysis of business, forecasting the sales, and many more. Neural networks are adaptable to changing inputs so that there is no need for designing the algorithm again based on the inputs. In this article, we’ll discuss single-layered neural network with its syntax and implementation of the neuralnet() function in R programming. Following function requires neuralnet package.

Neural Networks can be classified into multiple types based on their depth activation filters, Structure, Neurons used, Neuron density, data flow, and so on. The types of Neural Networks are as follows:

Depending upon the number of layers, there are two types of neural networks:

A single-layered neural network often called perceptrons is a type of feed-forward neural network made up of input and output layers. Inputs provided are multi-dimensional. Perceptrons are acyclic in nature. The sum of the product of weights and the inputs is calculated in each node. The input layer transmits the signals to the output layer. The output layer performs computations. Perceptron can learn only a linear function and requires less training output. The output can be represented in one or two values(0 or 1).

Parameters:
formula: represents formula on which model has to be fitted
data: represents dataframe
hidden: represents number of neurons in hidden layers

To know about more optional parameters of the function, use below command in console: help(“neuralnet”)

Example 1:
In this example, let us create the single-layered neural network or perceptron of iris plant species of setosa and versicolor based on sepal length and sepal width.
Step 1: Install the required package 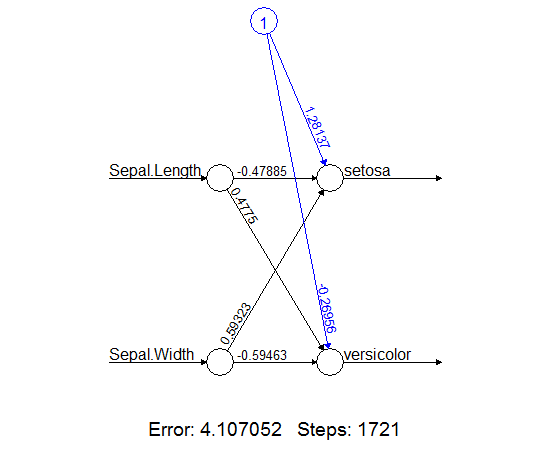 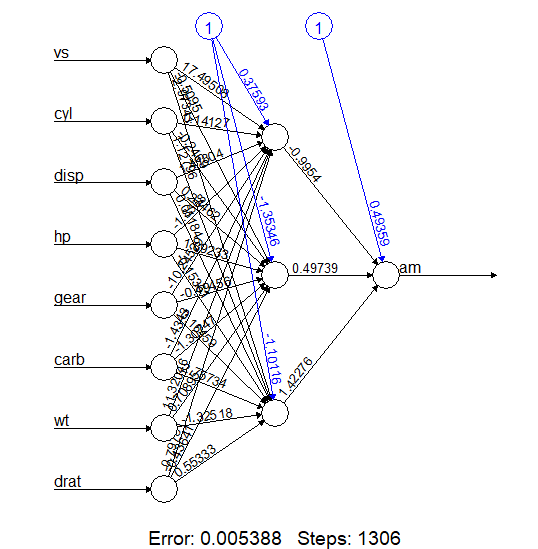 Explanation:
In above output, “am” value for each row of test dataset is predicted using multi-layer neural network. As in neural network created by the function, predicted values greater than 0.49 makes “am” value of car to be 1.