Silicon dioxide, often known as silica, is a silicon oxide with the chemical formula SiO2 that occurs naturally as quartz and in a variety of living creatures. In many parts of the world, silica is an important component of sand. Silica is a mineral ingredient as well as a synthesized product, making it one of the most complex and abundant categories of minerals. Some notable examples include fused quartz, fumed silica, silica gel, and aerogels. It is utilized in structural materials, microelectronics (as an electrical insulator), and food and pharmaceutical components.

What is Silicon Dioxide?

Mining, sand mining, and quartz purification are all methods of obtaining silicon dioxide. Acidification of sodium silicate solutions yields precipitated silica or amorphous silica. When silica gel is rinsed and dehydrated, colorless microporous silica is formed. As a result, silicon dioxide is also known as silica.

Acidification of sodium silicate solutions yields amorphous silica or precipitated silica. To make colorless microporous silica, silica gel is cleaned and dehydrated. The reaction involving a trisilicate and sulphuric acid is as follows:

The silicon atom is tetrahedrally coordinated in the bulk of silicates, with four oxygen atoms around a core Si atom. As a result, SiO2 produces three-dimensional network solids in which each silicon atom is covalently connected to four oxygen atoms in a tetrahedral fashion. CO2 is a linear molecule. The double bond rule is demonstrated by the significantly different structures of carbon and silicon dioxides. 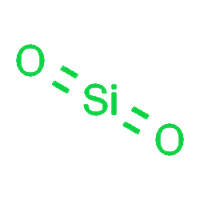 Silica is non-toxic when used orally. A 2008 study discovered that the higher the quantities of silica in water, the lower the incidence of dementia. As the risk of dementia decreased, the dose of silica in drinking water was increased to 10 mg/day. Inhaling finely divided crystalline silica dust can induce bronchitis, lung cancer, or silicosis due to dust lodgement in the lungs. When fine silica particles are inhaled in large quantities, rheumatoid arthritis and lupus become more prevalent.

Question 1: What are the uses of silicon dioxide?

The building industry accounts for approximately 95% of the industrial use of silicon dioxide (sand), for example, in the making of concrete (Portland cement concrete). Silica, in the form of sand, is utilised as a fundamental material in the production of metallic components in engineering and other sand casting applications. Because of silica’s relatively high melting point, it can be used in several applications.

Question 2: How is silicon dioxide produced?

The majority of silicon dioxide is produced through mining activities such as sand extraction and quartz purification. Quartz is useful for a wide range of applications, but it may require chemical processing to produce a more suitable product (for example, more reactive or fine-grained), or to make it purer. As a byproduct of heated processes such as ferrosilicon manufacturing, silica fume is created.

When taken orally, silica is largely non-toxic. Inhaling finely divided silica crystalline dust, on the other hand, may contribute to silicosis, bronchitis, or lung cancer because the dust becomes retained in the lungs and continuously irritates the tissue, reducing lung capacity.

Question 4: What is silicon dioxide’s function?

Silicon dioxide can also be present in a number of other foods and supplements. It works as an anticlumping agent in food to keep clumps from forming. It prevents powdered ingredients from sticking together in supplements.

Question 5: What Is The Difference Between Silicon And Silicon Dioxide?

Silicon is a naturally occurring element. It is the element with the greatest abundance in the earth’s crust. It has both metal and nonmetal properties. Silicon dioxide is also known as silica. It is created by fusing silicon with oxygen. It is found in plants, water, the earth’s crust, and animals.