Flowering plants reproduce by sexual and asexual means. The process of sexual reproduction is as follows: Pre-fertilization-which consists of Gametogenesis and Gamete transfer or pollination, Fertilisation- Syngamy + triple fusion, and Post fertilisation-Which consists of endosperm and embryo development. Maturation of ovule into seed 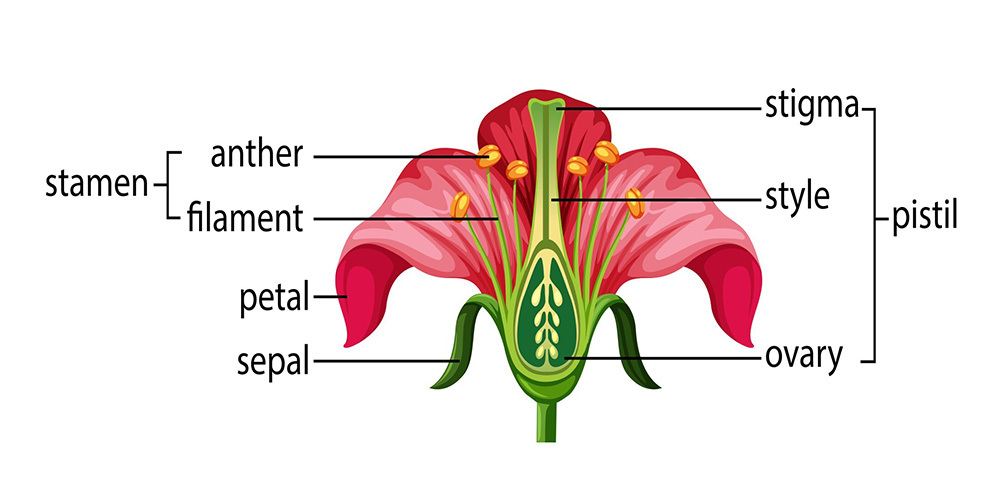 It represents the male gamete and is spherical having a two-layered wall.

Gynoecium represents the female reproductive part of a flower. It consists of whorls of pistils. Each pistil has three parts.

The process of formation of megaspore form. The megaspore mother cell (microspore) is called megasporogenesis.
Microspore is large and contains a dense cytoplasm. It undergoes meiosis to produce four megaspores. The single functional megaspore develops into the female gametophyte. This kind of development is called monosporic development.

The nucleus of the functional megaspore divides mitotically to form two nuclei which move toward the opposite pole and form 2 nucleate embryosac. Two more sequential mitotic nuclear divisions ensure leading to the 8 nuclei and 8 nucleate embryo sac each opposite end has 4 nucleus group.

Distribution of the cell within embryo sac

Pollination is a course of moving the dust/pollen grains across the anther and the stigma of a similar flower of a plant or to various plants for the process of fertilization and the creation of seeds. The specialists engaged in moving the pollen grains are birds, wind, creatures, and water.

Autogamy (self-pollination)- It is the transfer of pollen grain from another to the stigma of the same flower. It requires the anther and stigma lie closely. Plants like viola, oxalis, and commelina produce 2 types of flowers.

After entering into synergids, the pollen tube releases 2 male gametes into the cytoplasm of the synergies.

Following double fertilization, the event of endosperm and embryo development, maturation of ovule into seed, and ovary into fruit are collectively termed post-fertilization events.

Endosperm– Endosperm cells are filled with reserved food materials. They are used for the nutrition of the developing embryo.
Steps of endosperm development

Question 1: What are the agents of pollination?

Question 2: What are the methods of sexual reproduction in plants?

Sexual reproductive system involves the fusion of gametes thereby produces offspring flowers which are genetically different from the parent. The male and the female reproductive structures in flowers are androecium and gynoecium. This can be divided into three stages;

Question 4: Why vegetative reproduction is also considered as a type of asexual reproduction?

Vegetative reproduction is a cycle during which new plants are obtained without the get together of seeds or spores. It includes the engendering of plants through specific vegetative parts like the rhizome, sucker, tuber, bulb, and so on. It doesn’t include the combination of the male and the female gamete and requires only one parent. Consequently, vegetative proliferation is considered as a sort of asexual reproduction.