Setting up the environment in Java

Java is a general-purpose computer programming language that is concurrent, class-based, object-oriented, etc. Java applications are typically compiled to bytecode that can run on any Java virtual machine (JVM) regardless of computer architecture. The latest version is Java 19. Below are the environment settings for both Linux and Windows. JVM, JRE, and JDK three are all platform-dependent because the configuration of each Operating System is different. But, Java is platform-independent.  Few things must be clear before setting up the environment which can better be perceived from the below image provided as follows: 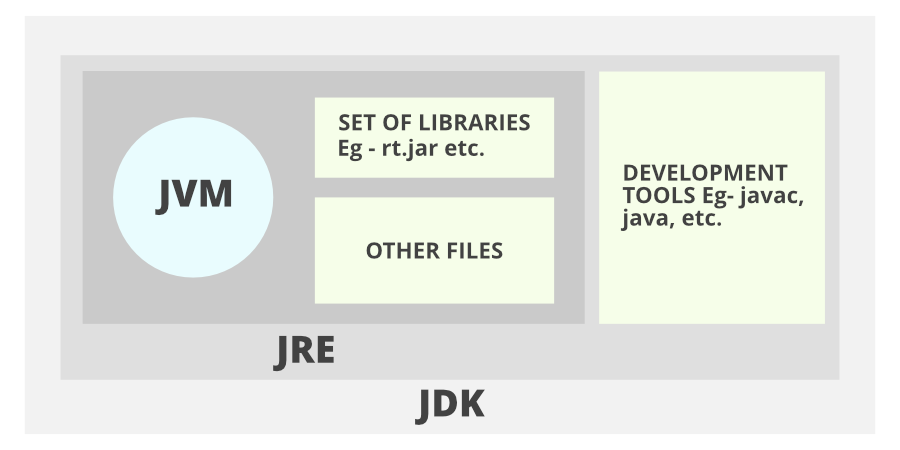 Now let us discuss the steps for setting up a Java environment with visual aids. Let’s use the Windows operating system to illustrate visual aids.

Steps: Here we will be proposing steps for three different operating systems as listed:

Steps for setting the environment in Windows operating system are as follows:

Step 3: Go to Control Panel -> System and Security -> System. Under the Advanced System Setting option click on Environment Variables as highlighted below. 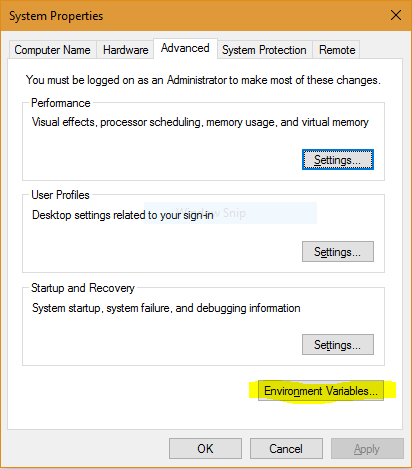 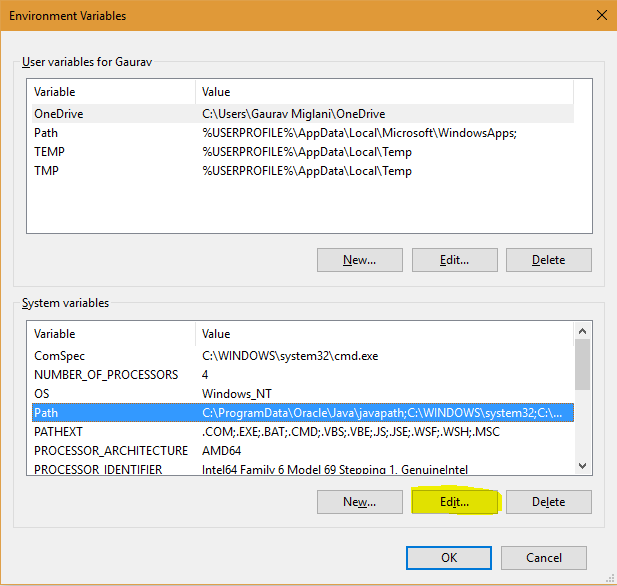 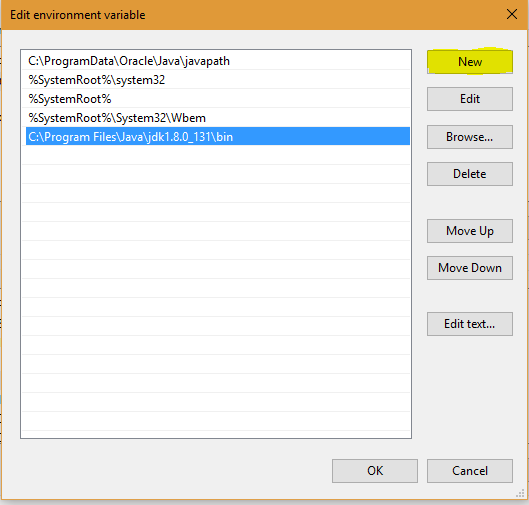 Step 6: Click on OK, Save the settings, and you are done !! Now to check whether the installation is done correctly, open the command prompt and type javac -version. You will see that java is running on your machine.

Note: To make sure whether the compiler is set up, type javac in the command prompt. You will see a list related to javac.

In Linux, there are several ways to install java. But we will refer to the simplest and easy way to install java using a terminal. For Linux, we will install OpenJDK. OpenJDK is a free and open-source implementation of the Java programming language. Steps for setting the environment in the Linux operating system are as follows:

Step 2: Type command as below as follows:

Step 3: For the “JAVA_HOME” (Environment Variable) type command as shown below, in “Terminal” using your installation path…(Note: the default path is as shown, but if you have to install OpenJDK at another location then set that path.)

Step 4: For “PATH” (Environment Value) type command as shown below, in “Terminal” using your installation path…Note: the default path is as shown, but if you have to install OpenJDK at another location then set that path.)

Note: We are done setting up the environment in Java for Linux OS.

Note: Now to check whether the installation is done correctly, type java -version in the Terminal. You will see that java is running on your machine.

Step 1: Open the terminal from the application folder or simply press the “command” and “shift” key together and write initials of the terminal and press enter.

It will be good to have package manager such as homebrew installed in your machine as we can operate to install any software from here itself simply by using terminal commands.

Step 2: Now in order to configure first write the command ‘java –version ‘ where the message below it will pop that there is no

Note: If it was set up then you would have been getting the version displayed on the screen as it is shown below where in that machine it was already set up. So remember to cross-check in your machine once you have successfully set it up in yours.

Step 2: Once we are done with installing JDK now let us move on setting up the java_home environment variable for that you will have to look into something called s ‘bash_profie’ using the below command

You will notice that in your terminal there will be no bash_profile set but it is shown below so here in this machine it is already set up. In order to set up if not there we have to create it for which lets us prior seek into java home variables whether it is set up or not. 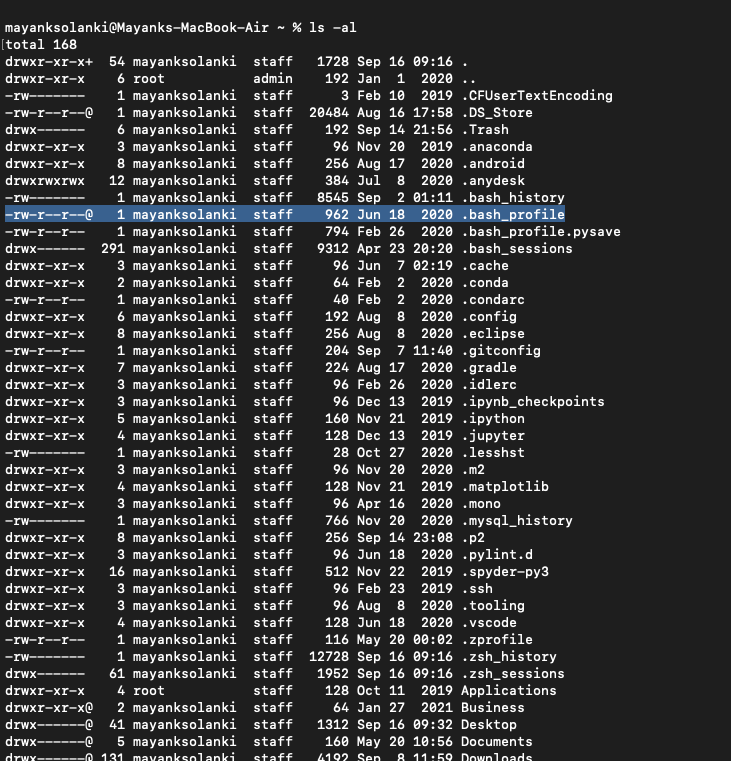 Step 3: Setting up the home java variable. Using the below command to check or setup if not installed as follows on the terminal:

If it is showing blank then the java home variable is not set up as perceived from the above image.

Make sure to go to the root folder in the terminal and write the command ‘touch ./bash_profile ‘

Now you will see that bash-profile s created which is as shown in step2 in your machine which hone can verify by writing command as follows:

Step 5: Edit the .bash_profile created and for java, you just have to write the command marked in below media and provided below as follows: 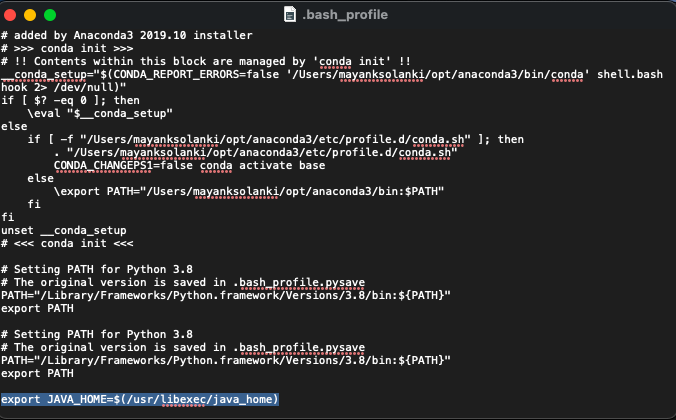 Save this file and relaunch the terminal by closing it.

Step 5: Verifying whether it is installed by entering the following two commands

Previous
Similarities and Difference between Java and C++
Next
Java Basic Syntax
Related Articles
1. Setting up Java Competitive Programming Environment
2. Setting up C++ Development Environment
3. How to get the value of System Property and Environment Variable in Java?
4. Enable Remote Debugging For Java Application Deployed in Kubernetes Environment
5. Environment setup for JSP
6. Setting the Position of the Image in PDF Document using Java
7. Setting Background to a Table in a PDF using Java
8. Setting Up Proxy Connection to a System in Java
9. How To Connect WiFi Connection By Proxy Setting?
10. Difference Between java.sql.Time, java.sql.Timestamp and java.sql.Date in Java
Article Contributed By :