Term tissue ( French word meaning woven ) was used by N.Grew (1682) the father of plant anatomy. Nageli is regarded as the father of Modern Anatomy. A cell is the functional and structural unit of life. A tissue is a group of cells having a common origin, the same method of development, and function. Anatomy deals with the internal organization of plants. In plants, the terms anatomy and histology have the same meaning. Different organs in plants show differences in their internal structure. Within angiosperms, the monocots and dicots are also seen to be anatomically different. The internal structures show adaptations to diverse environments. 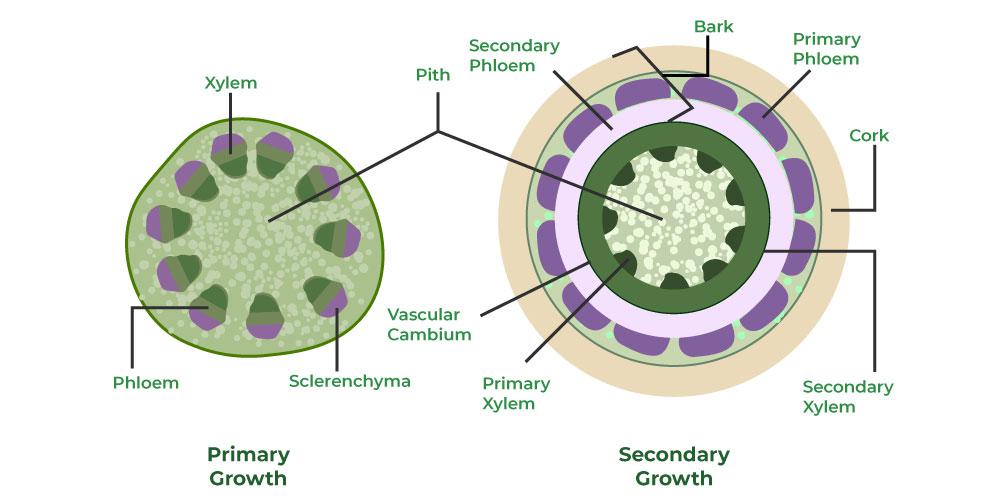 The secondary tissues formed by the activity of vascular cambium in steler region, exert a pressure on the outer tissue and cause rupturing of epidermis and crushing of cortex and finally peel off. To withstand this pressure, the cells of pericycle become meristematic to form cork cambium(phellogen). It form phellem(cork) on the outside and secondary cortex on the inner side. Cork cambium and secondary cortex together are called periderm which is protective in nature. Lenticels are formed in the cork for aeration. Bark formation is very early in the roots than the stem.

Why Secondary growth is absent in the Monocot root?

Question 1: What do you mean by Secondary Growth?

Secondary growth is characterized by an increase in the thickness or girth of the plant. It is caused by cell division in the lateral meristem.

Question 2: Who is the father of Modern Anatomy?

Nageli is regarded as the father of Modern Anatomy.

Cork cambium and secondary cortex together are called periderm which is protective in nature.

Question 4: What is the significance of Secondary growth?

Secondary growth adds to the girth of the plant. It provides support to increasing the weight of the aerial growth.

Question 5: Where does secondary growth in roots occur?

It occurs behind the root hair zone. In the root, primary cambium is absent.