An extracellular fluid known as saliva is created and emitted by salivary glands in the mouth. Saliva in humans is primarily made up of water, with the other components include electrolytes, mucus, white blood cells, epithelial cells (from which DNA can be retrieved), enzymes (such as lipase and amylase), and antibacterial compounds (such as secretory IgA, and lysozymes).

In order to start the digestion of dietary carbohydrates and lipids, salivary enzymes are crucial. In addition to protecting teeth from bacterial damage, these enzymes help break down food particles stuck in tooth fissures. Saliva also serves a lubrication purpose by moistening food, enabling swallowing, and preventing the drying out of the mouth mucosa.

The salivary glands, which are exocrine glands located in the skull, oral cavity, and surrounding areas, release saliva into the mouth. Their purpose is to assist in protecting and lubricating the oral mucosa. Additionally, they aid in the mastication of food, which results in the formation of a food bolus that is prepared for swallowing for further processing.

They contribute to digestion by excreting salivary enzymes, mostly amylase, which begins the breakdown of carbohydrates. The size of the glands varies greatly, and they are further divided according to the type of saliva they secrete.

The biggest and most significant salivary glands are known as the major glands. The majority of your mouth’s saliva is produced by them.

The parotid glands, submandibular glands, and sublingual glands are the three pairs of major salivary glands.

The submandibular glands are situated below the jaw and are about the size of a walnut. These glands produce saliva, which is then secreted into the mouth from beneath the tongue.

The superficial lobe and the deep lobe are the two components of the submandibular glands, just like the parotid glands. Structures close by include:

It is almond-shaped, weighs around 3–4 g, and is the smallest of the three main salivary glands. The gland is located lateral to the genioglossus, medial to the sublingual fossa of the mandible, above the mylohyoid, and below the mucosa of the mouth floor. It is made up of a single main gland duct and numerous smaller ducts. With or close to the submandibular duct, Bartholin’s duct, the primary duct, opens. Along the sublingual fold, a number of smaller ducts, the duct of Rivinus, open independently.

The aerodigestive tract and mouth are covered in many little salivary glands. These glands, in contrast to the larger salivary glands, are too small to be seen without a microscope. The majority are located in the cheeks, nose, sinuses, larynx, the roof of the mouth, lining of the lips, tongue, and these areas (voice box). 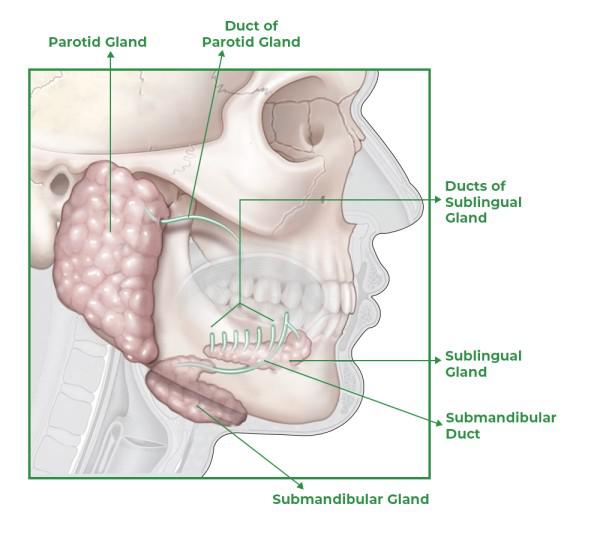 The activity of the neurons in the salivatory nuclei, which are situated close to the dorsal pontomedullary junction, regulates salivation or saliva production by the submandibular, sublingual, and parotid glands. The chorda tympani branch of the facial nerve carries preganglionic parasympathetic axons that originate from cells in the superior salivatory nucleus and terminate within the submandibular ganglion. The sublingual and submandibular glands receive postganglionic cholinergic fibers, which in turn induce salivary production. The lacrimal, nasal, and palatine glands are likewise controlled by neurons in the superior salivatory nucleus. The sphenopalatine ganglion, whose postganglionic fibers innervate the lacrimal gland and glands of the nasal epithelium, receives its axons from the facial nerve.

Through the glossopharyngeal nerve and the otic ganglion, neurons in the inferior salivatory nucleus innervate the parotid gland. These preganglionic parasympathetic neurons receive inputs from higher neuraxis centers and respond to taste, smell, and mechanical stimulation of other mouth structures.

Saliva and the proteins it contains are essential for maintaining oral homeostasis. For brief periods of the day, more strong taste or chewing cues can cause up to 10-fold increases in salivation. Reflex salivary flow happens at a low “resting” rate. Autonomic neurons control the secretion of salivary fluid and proteins. Acinar cells at the endpieces of the salivary gland ductal tree secrete saliva when acetylcholine, which binds to M3 and M1 muscarinic receptors, is released by cholinergic parasympathetic neurons, which supply all salivary glands. The majority of salivary glands also get varying degrees of innervation from sympathetic nerves, the release of which results in a higher release of stored proteins, primarily from acinar cells but also from ductal cells. The intracellular calcium and cyclic AMP pathways have some “cross-talk” that links autonomic activation to secretion, and simultaneous stimulation increases salivary protein production. Other non-adrenergic, non-cholinergic neuropeptides released from autonomic neurons stimulate salivary gland secretion, and vasointestinal peptide, which is parasympathetically generated, contributes to the reflex vasodilatation that occurs with secretion. Nitric oxide of the neuronal kind, which is soluble and triggered by calcium, is thought to be a mediator of salivary protein secretion in response to autonomimetics. Aquaporin 5 is required for salivary glands to secrete fluid, but it is unclear to what extent cholinomimetics can increase aquaporin 5 expression on apical acinar cell membranes. Salivary gland atrophy results from prolonged autonomic denervation, liquid diet feeding (less reflex stimulation), or duct ligation. The second and third examples show that glands can regenerate as long as the autonomic innervation is still there. It is still unclear how nerves and salivary cells combine during regeneration or during the development of the salivary gland.

Saliva is produced by the salivary glands and acts as a lubricant for chewing and swallowing. In addition to electrolytes, mucin, and digestive enzymes, most notably amylase, saliva also contains a substantial amount of water. The breakdown of carbohydrates depends on these enzymes. By aiding in tooth cleaning and preserving a pH that prevents dental decay, saliva is crucial for excellent dental health.

Saliva production is a complicated process. Crystals that can generate a nidus for stone development in the saliva, similar to those in the urinary tract, can form. These stones have the potential to cause duct obstruction, fast gland enlargement, discomfort, and ultimately infection. The submandibular system is where this happens most frequently, and the sublingual gland only occasionally. Even in the absence of stone development, the infection can still happen. In fact, infections can result from anything that reduces salivary flow. Drug side effects, dehydration, and gland atrophy in the elderly can result in a low-flow state and suppurative bacterial parotitis. The salivary glands may also be affected by primary viral infections, the most notable of which being mumps, sometimes known as acute epidemic parotitis. The self-limiting infection known as the mumps is marked by fever, orchitis, and unilateral or bilateral parotid enlargement.

The diagnosis of a salivary gland mass depends on the histopathologic appearance of the mass because the salivary glands are capable of a very wide spectrum of neoplastic expression, both benign and malignant. The presence of a mass in the parotid gland that is accompanied by facial paralysis is symptomatic of a malignant neoplasm. Facial paralysis associated with benign tumors is quite uncommon.

There are several disorders that might be associated with diffuse parotid enlargement without discomfort. Fatty infiltration and salivary gland hypertrophy can result in enlargement of the glands, especially the parotid, in conditions including alcoholism, starvation, diabetes, and obesity. The glands may also grow widely or locally as a result of Sjogren’s syndrome or Mikulicz’s disease. Dry mouth and eyes are the hallmarks of this illness, which may also be accompanied by other autoimmune diseases such as polymyositis, lupus erythematosus, or rheumatoid arthritis. According to histopathology, the glands have lymphocytic infiltration and intralobular duct epithelial hyperplasia.

Three pairs of main glands and several minor glands, all of which are located in the mouth cavity, create saliva. 90% of total saliva secretions are produced by the parotid, submandibular, and sublingual salivary glands, with the remaining 10% coming from minor salivary glands.

Question 2: What function does saliva serve?

Saliva lubricates the mouth while you chew and swallow, dries out dangerous acids, and moistens the mouth for comfort. Additionally, it disinfects the mouth and stops bad breath, guards against tooth decay and gum disease, preserve enamel and quickens the healing of wounds.

Question 3: Where are the salivary glands located?

The primary duct (Stensen’s duct) for each gland opens up close to the second upper molar at the back of the mouth cavity. Along the side of the lower jawbone is the second set of glands, the submaxillary glands, sometimes known as submandibular glands.

The superior salivatory nucleus of the medulla in the brainstem is the origin of the glossopharyngeal nerve, which is primarily responsible for controlling the gland’s production.

Question 5: How many enzymes are present in saliva?

When food first enters your mouth, the digestive process begins. Although the mouth and esophagus do not manufacture any enzymes on their own, saliva, which is produced in the salivary glands and spat into the mouth and then into the esophagus, contains numerous vital enzymes like lingual lipase, amylase, and lysozyme.

Question 6: What controls the secretion of saliva?

The body’s salivary glands create and secrete saliva. The autonomic nervous system, which consists of sympathetic and parasympathetic nerve fibers, regulates these glands.