Respiration is a chain of chemical reactions which enables all living entities to synthesize the energy required to sustain themselves. In breath, inhalation of oxygen and exhalation of carbon dioxide gas happens. As an entity needs energy through oxidizing nutrients and consequently liberating wastes, it is called a metabolic process. Different plant sections experience much less gas exchange during respiration. As a result, each component nourishes and meets its own energy needs.

As a result, plants’ leaves, stems, and roots each exchange gases separately. Stomata, which are microscopic pores for gas exchange, are present in leaves. Cells in the leaves use up the oxygen taken in by stomata to break down glucose into water and carbon dioxide.

Respiration In The Roots

The roots of plants, which are located underground, take in air from the spaces and air gaps between the soil particles. As a result, oxygen taken up by the roots is used to release energy that will later be used to move salts and minerals from the soil.

To breathe, the air in a stem diffuses into the stomata and travels through various regions of the cell. The released carbon dioxide is distributed through the stomata at this time. In higher or woodier plants, lenticels are known to perform the gaseous exchange.

Respiration in the Leaves Stomata, or small pores, are part of leaves. The gaseous exchange takes place by stomata-mediated diffusion. Every stoma is regulated by guard cells. When the stoma between the inferior leaves and the atmosphere is closed and opened, gases are exchanged.

Stomata: It’s a plant’s specialized part present in the epidermis layer of the leaves and stems. Bean-shaped guard cells form stomatal pores and promote stomatal opening and closing during the gaseous exchange. Carbon dioxide and oxygen are the gases exchanged during the daytime.

To carry out the oxidation of glucose into the byproducts of carbon dioxide, water, and energy, plants respire continuously throughout the day and night. Using sunlight and chlorophyll, a plant converts carbon dioxide and water into glucose and oxygen during photosynthesis.

The process by which light energy is transformed into chemical energy in the form of sugars is known as photosynthesis. Using light energy, glucose (or other sugars) are created from carbon dioxide and water, with oxygen being released as a byproduct.

The glucose molecules act as the fuel for the cells; their chemical energy can be obtained through procedures like cellular respiration and fermentation, which result in the production of adenosine triphosphate (ATP), a small energy-carrying molecule, to meet the immediate energy requirements of the cell.

Difference between Photosynthesis and Respiration 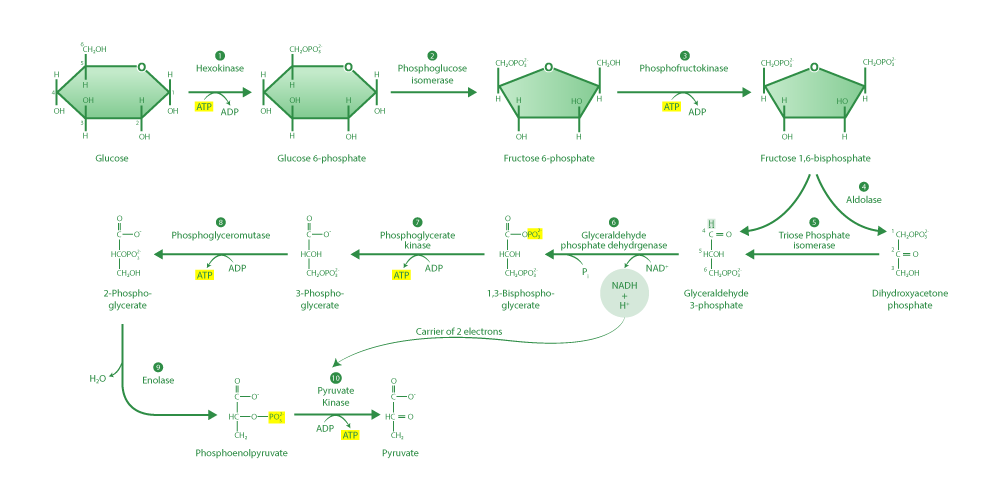 The process by which glucose is broken down to provide energy is known as glycolysis. It generates two pyruvate molecules, ATP, NADH, and water. There is no need for oxygen throughout the process, which occurs in the cytoplasm of a cell. Both aerobic and anaerobic creatures experience it.

The first stage of cellular respiration, which takes place in all organisms, is called glycolysis. The Krebs cycle comes after glycolysis during aerobic respiration. Small amounts of ATP are produced by the cells in the absence of oxygen as fermentation follows glycolysis.

Using pyruvic acid, glycolysis is the first step in this process. There is no energy gained when the pyruvic acid compounds are transformed into wastes. This process doesn’t already produce any energy, and often, it happens on its own. Rarely does it occur anaerobically? Lactic acid fermentation and alcoholic fermentation are the two most well-known kinds of fermentation (methanol and acetone fermentation).

Using lactic acid fermentation, sugar is metabolized to produce energy. The method is more frequently used in food preservation. It happens when there are fungi and bacteria around (Lactobacillus acidophilus). In this kind of fermentation, NADH transfers its electrons to pyruvate directly. Both in the making of yogurt and in the muscle cells, it may be seen.

Alcohol fermentation is the process through which food’s carbohydrates are transformed into energy. Some types of tea, bread, and beverages can be made by alcoholic fermentation. Some bacteria and yeast are capable of carrying out ethanol production.

RQ=volume of carbon dioxide eliminate/ The volume of oxygen consumed

The respiratory quotient reaches zero when the substrate of carbohydrates is completely oxidized. Here, the amount of carbon dioxide released and the amount of oxygen absorbed is equal.

Carbohydrates have an RQ of about 1

FAQs on Respiration in Plants

Question 1: What is respiration?

Respiration is a chain of chemical reactions which enables all living entities to synthesize the energy required to sustain themselves.

Stomata are part of leaves. The gaseous exchange takes place by stomata-mediated diffusion. Every stomata is regulated by guard cells. When the stoma between the inferior of leaves and the atmosphere is closed and opened, gases are exchanged.

Question 3: What is photosynthesis?

The process by which light energy is transformed into chemical energy in the form of sugars is known as photosynthesis. Using light energy, glucose (or other sugars) are created from carbon dioxide and water, with oxygen being released as a byproduct.

Question 4: Why do plants breathe at night?

During the course of their nighttime respiration, plants exhale carbon dioxide, take in oxygen, and oxidize food that has been stored. For this reason, it is advised against spending the night under a tree.

Question 5: Which gas does a plant utilize to breathe?

In addition to being created during plant respiration, the gas carbon dioxide is essential for photosynthesis to occur in plants. A plant’s aerobic respiration requires oxygen, a byproduct of photosynthesis, as a reactant.