A Boolean function is described by an algebraic expression consisting of binary variables, the constants 0 and 1, and the logic operation symbols

. The function is equal to 1 if

Canonical and Standard Forms –
Any binary variable can take one of two forms,

. A boolean function can be expressed in terms of

combinations since each variable can take two forms.
Each of the combinations is called a minterm or standard product. A minterm is represented by

.
For example, for a boolean function in two variables the minterms are –

In a similar way, if the variables are combined together with OR operation, then the term obtained is called a maxterm or standard sum. A maxterm is represented by

is the decimal equivalent of the binary number the maxterm is designated.

.
For example, for a boolean function in two variables the maxterms are –

Relation between Minterms and Maxterms – Each minterm is the complement of it’s corresponding maxterm.
For example, for a boolean function in two variables –

Constructing Boolean Functions – Now that we know what minterms and maxterms are, we can use them to construct boolean expressions.

“A Boolean function can be expressed algebraically from a given truth table by forming a minterm for each combination of the variables that produces a 1 in the function and then taking the OR of all those terms.”

with the following truth tables – 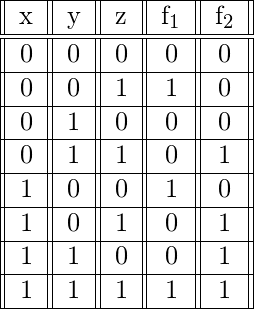 is 1 for the following combinations of

.
Therefore the algebraic expression for

Similarly, the algebraic expression for

If we use De Morgans Law on

We can conclude from the above that boolean functions can be expressed as a sum of minterms or a product of maxterms.

“Boolean functions expressed as a sum of minterms or product of maxterms are said to be in canonical form.