While working with large sets of data, it often contains text data and in many cases, those texts are not pretty at all. The is often in very messier form and we need to clean those data before we can do anything meaningful with that text data. Mostly the text corpus is so large that we cannot manually list out all the texts that we want to replace. So in those cases, we use regular expressions to deal with such data having some pattern in it.

We have already discussed in previous article how to replace some known string values in dataframe. In this post, we will use regular expressions to replace strings which have some pattern to it.

Problem #1 : You are given a dataframe which contains the details about various events in different cities. For those cities which starts with the keyword ‘New’ or ‘new’, change it to ‘New_’.

Solution : We are going to use regular expression to detect such names and then we will use Dataframe.replace() function to replace those names. 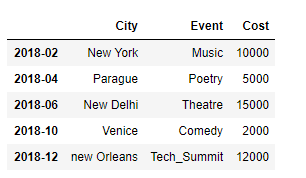 Now we will write the regular expression to match the string and then we will use Dataframe.replace() function to replace those names.

As we can see in the output, the old strings have been replaced with the new ones successfully.

Problem #2 : You are given a dataframe which contains the details about various events in different cities. The names of certain cities contain some additional details enclosed in a bracket. Search for such names and remove the additional details. 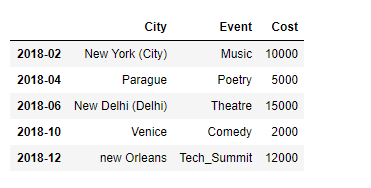 Now we will write our own customized function to match the description in the names of the cities.