In C programming, using arrays and string for data storage at run time which is volatile and gets memory in RAM. But to store data permanently in a hard disk which can be manipulated furthermore. So, the idea is to use a CSV file for data storage and manipulation. Not only CSV but other files like data, txt, and bin can also be used for data manipulation. But CSV file as the name suggests (Comma Separated Values) stores data in a table format which saves a lot of time in making perfect structure.

In Relational Databases data gets stored in a table format so by using CSV File, the database can be created.

Below is an example of a CSV File: 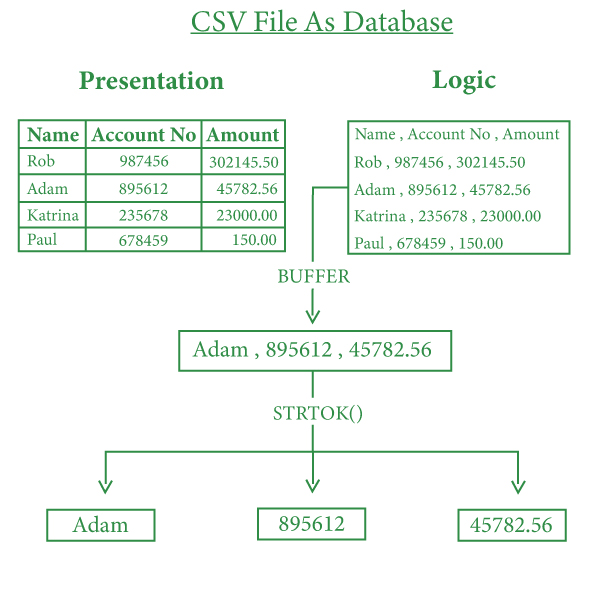 Create a buffer of character array (can be referred to as string) which takes all the data present in the file and by using File Pointer and fgets() data can be extracted. Use two variables row and column which will maintain the unique identification of every entry.

As the string contains comma ‘, ‘ for separating values, so the idea is to use strtok() function for splitting values. This function splits a string using a delimiter here we are using ‘, ‘.

Data Extraction deals with Opening an existing CSV file and extracting and printing the whole data on the console.

Data Addition deals with opening an existing CSV file, taking user inputs for the data to be added to the file, and then adding this data to the CSV file.