Organisms require energy to carry out a variety of tasks. The breakdown of different food ingredients, such as proteins, carbs, lipids, etc., produces this energy. Catabolic activities require oxygen, and the release of carbon dioxide occurs. As a result, the body requires a constant exchange of gases, with carbon dioxide, produced being expelled and oxygen from the atmosphere being taken in. This is called “breathing” or “respiration”.

The ability of humans to control or regulate their breathing rhythm to meet their body’s needs is significantly known as the regulation of respiration. The complex interaction of three respiratory system parts.

Both of these structures, the pons Varolii and the medulla oblongata, are found in the brain stem and are in charge of autonomic breathing. The higher brain centres provide the input necessary for these centres to produce the necessary voluntary breathing efforts.

These include both chemoreceptors and sensory receptors.

Other breathing muscles as well as the internal and external intercostal muscles of the rib cage and the abdominal muscles.

There are two mechanisms that can control breathing. 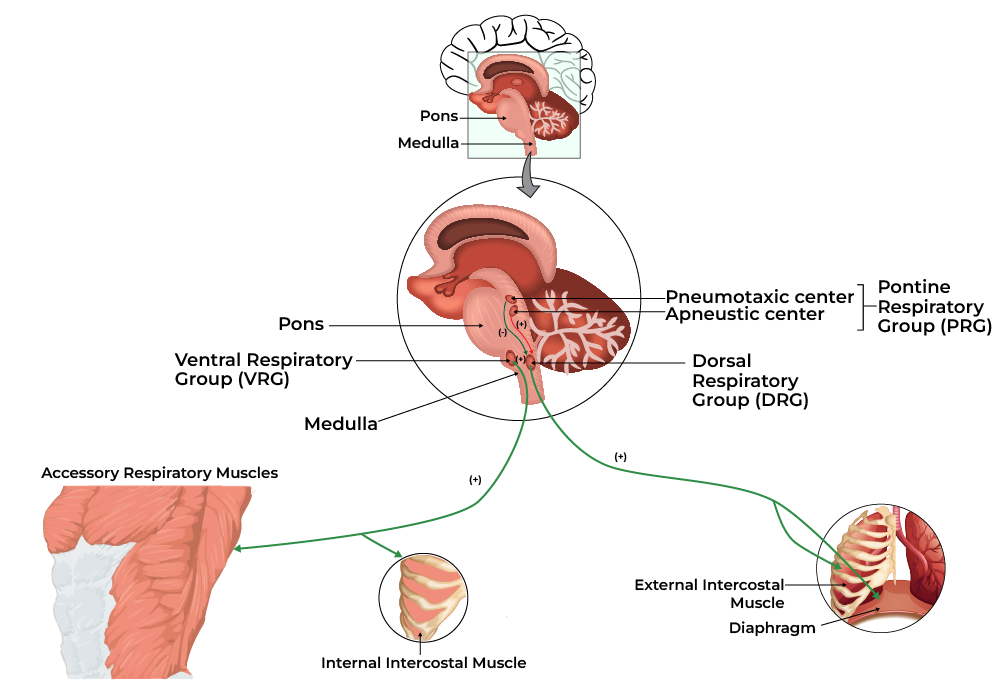 Respiration is modulated by neural impulses that travel from the brain’s respiratory centres to the muscles of the chest and diaphragm. The three major brain centres that control respiration are, they can be found in the pons and medulla of the brain. They stimulate the diaphragm and intercostal muscles to contract, which controls breathing.

The upper pons contains the pneumotaxic centre, which controls inspiratory volume and respiratory rate by sending inhibitory impulses to the inspiratory centre and shopping inspiration. This centre is probably important in fine-tuning breathing.

Along with the respiratory rhythm centre, the brain stem also has a chemosensitive region. It is very reactive to hydrogen ions and CO2. This centre is activated by an increase in CO2 and H+ ions, which instructs the rhythm centre to modify the breathing process and expel these substances.

There are certain receptors that, in addition to respiratory centres, have the ability to recognise changes in CO2 and H+ ion concentration and provide signals to control breathing. While some of them are receptors in the walls of bronchi and bronchioles, others are chemoreceptors found in the medulla, aortic arch, and carotid artery.

Factors Affecting the Rate of Respiration

FAQs on Regulation of Respiration

Question 1: What is the regions of the brain help to regulate respiration?

Breathing centres, which are made up of group neurons situated in the pons Varolii and medulla oblongata, control respiratory rhythm. The respiratory centres in the body control how quickly and deeply we breathe.

Question 2: What is considered the main regulator of respiration?

The medulla oblongata serves as a relay station for signals between the brain and the spinal cord. It has centres that control cardiac, respiratory, reflex, and vasomotor activity.

Question 3: What is the respiration process?

When you breathe in air from the outside, the oxygen in it combines with the glucose in your body cells to create carbon dioxide and water. Because heat is released during this process, respiration is regarded as an exothermic reaction.

Question 4: What energy is used in respiration?

Question 5: Which respiratory centres work against each other and together control the rate of respiration?

The apneustic centre prevents over-inflation whereas the pneumatic centre inhibits it, regulating the pace of respiration.

Previous
Let an = 1 n(n+1): Compute a1; a1 +a2; a1 +a2 +a3; a1 +a2 +a3 +a4. Then guess a1 + a2 +...+ an
Next
Wholly Owned Subsidiaries: Meaning, Advantages, and Disadvantages
Related Articles
1. Respiration - Definition, Types, Characteristics, Examples
2. What is Aerobic Respiration? - Definition, Diagram, Process
3. Respiration - Definition and Types
4. Respiration In Plants
5. Regulation of Cardiac Activity
6. What is Utility Analysis?|Total Utility and Marginal Utility
7. Relationship between TP, MP, and AP
8. Consumer's Equilibrium in case of Single and Two Commodity
9. Quartile Deviation and Coefficient of Quartile Deviation: Meaning, Formula, Calculation, and Examples
10. Mail Order Houses: Meaning, Advantages, and Disadvantages
Article Contributed By :