Different fluids make up the majority of our bodies. Body fluids are crucial for the normal operation of our tissues and perform the crucial tasks of supplying nutrients to live cells and removing toxic toxins created by our systems. Other techniques for facilitating these activities have been created by other animals. However, complex creatures like humans need blood and lymph fluids to carry out the aforementioned functions.

A muscle-filled organ, the heart is made up of specific cardiac muscles. The heart’s primary job is to pump blood to the body’s numerous organs. The human heart can control its activity due to several internal mechanisms, but certain outside forces control cardiac activity. In an autonomic nerve system, substances like hormones, ions, etc. are some of these factors.

The atrioventricular node (AV node) and sinoatrial node (SA node) nodal tissues automatically control the normal action of the human heart, which is why the heart is known as myogenic.

The autonomic nervous system regulates several physiological processes (ANS). It enhances the heart’s pace and force of contraction. It controls peripheral blood vessel resistance as well. The autonomic nervous system’s sympathetic and parasympathetic divisions cooperate to maintain the body’s equilibrium. The cardiac cycle helps the body’s blood flow throughout it. The cardiac cycle is managed by two fundamental systems. 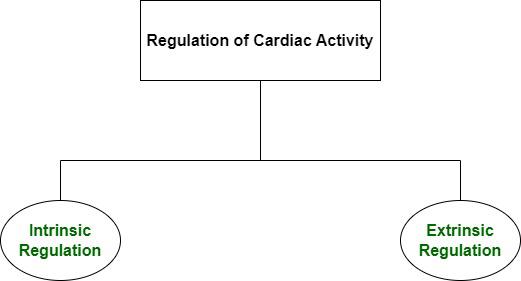 The SA-node, AV-node, and a group of His and Purkinje fibers are all involved in the intrinsic regulation of heart rate. The cardiac cycle is accelerated by the SA node, which produces an impulse on its own.

Nerves react to changes in biological fluids, such as a drop in the pO2, an increase in pCO2, and a rise in hydrogen ion concentration. Afferent impulses from chemoreceptors are transported by sinus and aortic nerves when they are triggered by any of the above conditions. Because of that, a heart rate will be the eventual effect.

In the walls of large veins, stretch receptors are present. They are referred to as volume receptors or low-pressure receptors. The dilation of the great veins stimulates these receptors. Afferent impulses from these receptors will be carried by the vagus nerve. Afferent impulses along the vagus also activate neurons in the brainstem, enhancing sympathetic nerve activity. Afferent signals decrease the cardioinhibitory center’s function, increasing heart rate. The heart’s sympathetic activity is increased, which raises the heart rate.

Norepinephrine is the chemical secreted from the end of the vasoconstrictor nerves (noradrenaline). The medulla of the adrenal endocrine glands secretes norepinephrine (=nor- adrenaline). The primary functions of epinephrine and norepinephrine are to increase metabolism and prepare organisms to deal with certain conditions brought on due to physical stress, such as a drop in blood pressure or blood sugar, rage, anxiety, fear, and so on.

Under normal conditions, norepinephrine regulates blood pressure. Which causes a restriction of almost all of the body’s blood arteries.  In addition to adrenal hormones, the medulla of the adrenal glands also secretes epinephrine (adrenaline). Every part of the body receives this hormone through the bloodstream, where it affects cells directly. Norepinephrine does not have the same effect on heart activity as epinephrine.

In contrast to the noticeably stronger constriction brought on by norepinephrine, it also causes a minor narrowing of muscle blood vessels. As a result, the heart rate is increased by adrenal medullary hormones.

FAQs on Regulation of Cardiac Activity

Question 1: What do you understand by the regularity of cardiac activity?

The regulation of heart activity involves the dynamic and continuous interaction of two different types of control systems, one neurological and one chemical.

The heart’s primary function in the cardiac cycle is to circulate blood around the body. It is defined as the electrical impulses that regulate the filling and emptying of the blood vessels as well as the contraction and relaxation of the heart muscles.

Question 3: Name the receptors that are present in the Chemoreceptor Mechanism.

Carotid and aortic bodies are the receptors that are present in the Chemoreceptor Mechanism.

Question 5: Mention the name of two systems in the cardiac cycle.