Regular Expressions or Regex (in short) in Java is an API for defining String patterns that can be used for searching, manipulating, and editing a string in Java. Email validation and passwords are a few areas of strings where Regex is widely used to define the constraints. Regular Expressions are provided under java.util.regex package. This consists of 3 classes and 1 interface. The java.util.regex package primarily consists of the following three classes as depicted below in tabular format as follows:

Regex in java provides us with 3 classes and 1 interface listed below as follows:

More understanding can be interpreted from the image provided below as follows: 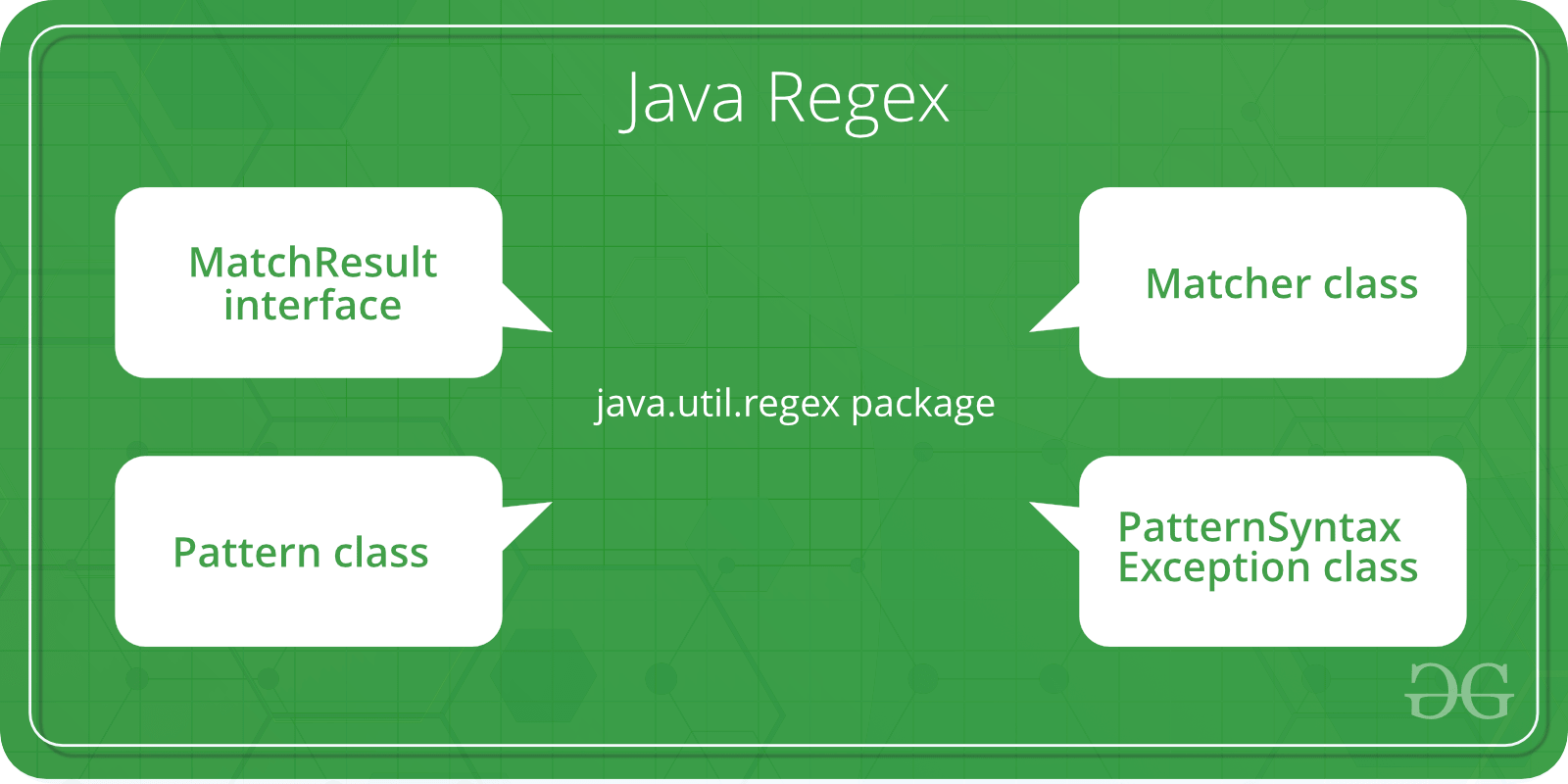 This class is a compilation of regular expressions that can be used to define various types of patterns, providing no public constructors. This can be created by invoking the compile() method which accepts a regular expression as the first argument, thus returns a pattern after execution.

This object is used to perform match operations for an input string in java, thus interpreting the previously explained patterns. This too defines no public constructors. This can be implemented by invoking a matcher() on any pattern object.

Note: T Pattern.matches() checks if the whole text matches with a pattern or not. Other methods (demonstrated below) are mainly used to find multiple occurrences of patterns in the text.

Let us do discuss a few sample programs as we did for Pattern class. Here we will be discussing a few java programs that demonstrate the workings of compile(), find(), start(), end(), and split() in order to get a better understanding of the Matcher class.

Example 4: split() method to split a text based on a delimiter pattern.

The string split() method breaks a given string around matches of the given regular expression. There exist two variations of this method so do go through it prior to moving onto the implementation of this method.

Now we are done with discussing both the classes. Now we will be introducing you to two new concepts that make absolute clear Also there is an exception class associated with

This is an object of Regex which is used to indicate a syntax error in a regular expression pattern and is an unchecked exception. Following are the methods been there up in the PatternSyntaxException class as provided below in tabular format as follows.

This interface is used to determine the result of a match operation for a regular expression. It must be noted that although the match boundaries, groups, and group boundaries can be seen, the modification is not allowed through a MatchResult. Following are the methods been there up here in this interface as provided below in tabular format as follows:

Lastly, let us do discuss some of the important observations as retrieved from the above article

This article is contributed by Akash Ojha. If you like GeeksforGeeks and would like to contribute, you can also write an article and mail your article to review-team@geeksforgeeks.orgerror-index. See your article appearing on the GeeksforGeeks main page and help other Geeks. Please write comments if you find anything incorrect, or you want to share more information about the topic discussed above.