BlueprintJS is a React-based UI toolkit for the web. This library is very optimized and popular for building interfaces that are complex data-dense for desktop applications. ProgressBar components provide a way to show the progress of any tasks/activity to the user in the form of the progress bar.

Approach: Let us create a React project and install React Blueprint module. Then we will create a UI that will showcase React.js BluePrint Progress bar Component CSS.

Step 1: To create a react app, you need to install react modules through npx command. “npx” is used instead of “npm” because you will be needing this command in your app’s lifecycle only once.

Step 2: After creating your react project, move into the folder to perform different operations.

Project Structure: After running the commands mentioned in the above steps, if you open the project in an editor you can see a similar project structure as shown below. The new component user makes or the code changes, we will be performing will be done in the source folder.

Example 1: We are creating a UI that shows Progress bar Component CSS.


Output: Now open your browser and go to http://localhost:3000/, you will see the following output:

Example 2: We are creating a UI that shows Progress bar Component CSS with no animation and no stripes.


Output: Now open your browser and go to http://localhost:3000/, you will see the following output: 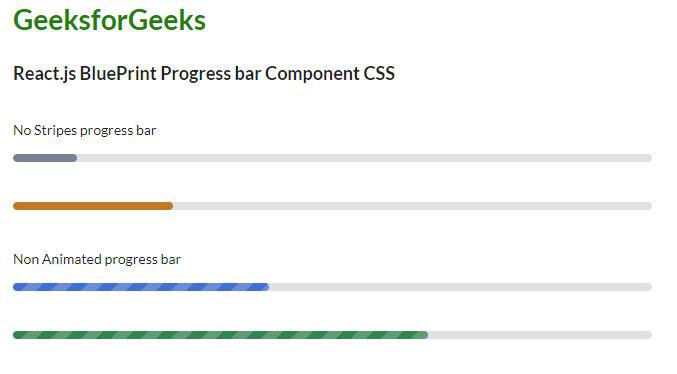