In mathematics, an expression with a root is referred to as a radical. A radical can be used to describe various types of roots of a number, including square roots, cube roots, fourth roots, etc. For example, common radicals like the square root and cube root are expressed by the symbols √ and ³√, respectively, where “3” is the degree or index of the number. If the index of the radical is not mentioned, then it is considered a square root. The word “Radical” is extracted from the Latin word “radix” which means “Root”. Let us consider an example to understand the concept of radical better. 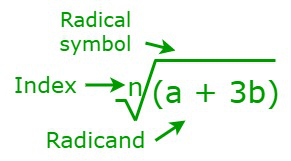 General rules of a Radical Formula

The following are some general guidelines for radicals.

Where x is the radicand,

n is the index of the radical, and

(n√) is the radical symbol or nth root.

To make the given expression radical-free, use the radical formula.

Now squaring on both sides we get

Hence, the value of the given radical expression is 9.25.

By using the quotient rule, we get

Hence, the value of the given radical expression is 5a2b2.

Now squaring on both sides we get

Hence, the value of the given radical expression is 6a2b.

Previous
Capture One vs Lightroom
Next
Explain how Water becomes a Renewable Resource
Related Articles
1. What is the value of sin(225°) in radical form?
2. Can a radical be negative when the index is even?
3. How do you know if a radical is rational or irrational?
4. Distance Formula & Section Formula - Three-dimensional Geometry
5. Arctan Formula - Definition, Formula, Sample Problems
6. What is Factoring Trinomials Formula?
7. Weighted Average Formula
8. Triangular Pyramid Formula
9. Lateral Area Formula
10. Explain Inverse Hyperbolic Functions Formula
Article Contributed By :