Kivy is a platform independent GUI tool in Python. As it can be run on Android, IOS, linux and Windows etc. It is basically used to develop the Android application, but it does not mean that it can not be used on Desktops applications.

VKeyboard is an onscreen keyboard for Kivy. Its operation is intended to be transparent to the user. Using the widget directly is NOT recommended. Read the section Request keyboard first.

This virtual keyboard has a docked and free mode:

If the docked mode changes, you need to manually call VKeyboard.setup_mode() otherwise, the change will have no impact.

During that call, the VKeyboard, implemented on top of a Scatter, will change the behavior of the scatter and position the keyboard near the target (if target and docked mode are set).

# Implementation of the Approach: 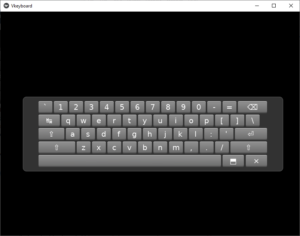