Formatting output using String modulo operator(%) :
The % operator can also be used for string formatting. It interprets the left argument much like a printf()-style format as in C language strings to be applied to the right argument. In Python, there is no printf() function but the functionality of the ancient printf is contained in Python. To this purpose, the modulo operator % is overloaded by the string class to perform string formatting. Therefore, it is often called a string modulo (or sometimes even called modulus) operator.

The string modulo operator ( % ) is still available in Python(3.x) and is widely used. But nowadays the old style of formatting is removed from the language. 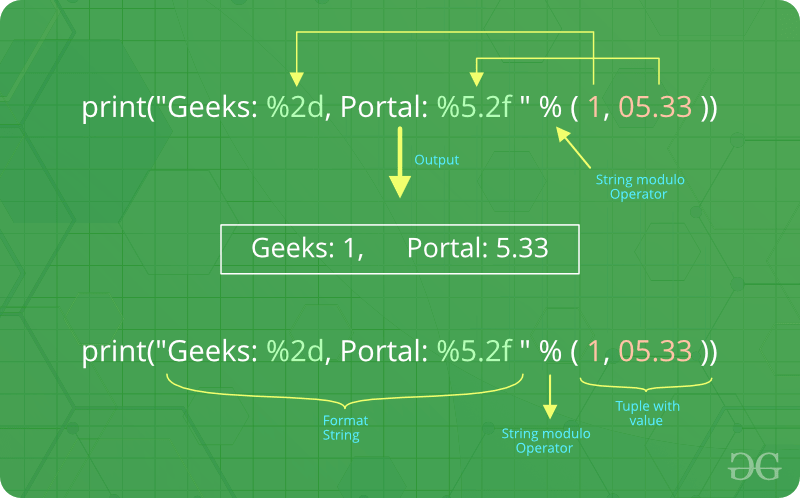 There are two of those in our example: “%2d” and “%5.2f”. The general syntax for a format placeholder is:

Let’s take a look at the placeholders in our example.

Formatting output using the format method :
The format() method was added in Python(2.6). The format method of strings requires more manual effort. Users use {} to mark where a variable will be substituted and can provide detailed formatting directives, but the user also needs to provide the information to be formatted. This method lets us concatenate elements within an output through positional formatting. For Example –

The following diagram with an example usage depicts how the format method works for positional parameters: