Keywords in Python are reserved words that can not be used as a variable name, function name, or any other identifier.

We can also get all the keyword names using the below code.

Let’s discuss each keyword in detail with the help of good examples.

Example: True, False, and None Keyword 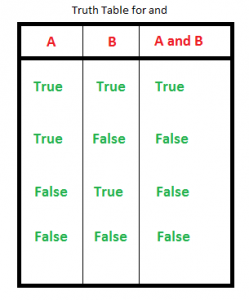 The above statements might be a bit confusing to a programmer coming from a language like C where the logical operators always return boolean values(0 or 1). Following lines are straight from the python docs explaining this:

Note that neither and nor or restrict the value and type they return to False and True, but rather return the last evaluated argument. This is sometimes useful, e.g., if s is a string that should be replaced by a default value if it is empty, the expression s or ‘foo’ yields the desired value. Because not has to create a new value, it returns a boolean value regardless of the type of its argument (for example, not ‘foo’ produces False rather than ”.) 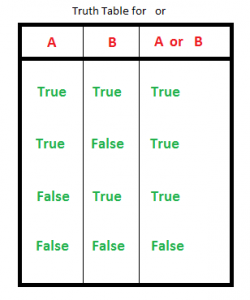 Example: and, or, not, is and in keyword

Iteration Keywords – for, while, break, continue

Example: For, while, break, continue keyword

Conditional keywords – if, else, elif

Example: if, else, and elif keyword

Note: For more information, refer to out Python if else Tutorial.

Note: For more information, refer to our Python Classes and Objects Tutorial .

with keyword is used to wrap the execution of block of code within methods defined by context manager. This keyword is not used much in day to day programming.

as keyword is used to create the alias for the module imported. i.e giving a new name to the imported module. E.g import math as mymath.

pass is the null statement in python. Nothing happens when this is encountered. This is used to prevent indentation errors and used as a placeholder.

Note: For more information refer to our tutorial Exception Handling Tutorial in Python.

del is used to delete a reference to an object. Any variable or list value can be deleted using del.

Note: For more information, refer to our Global and local variables tutorial in Python.

This article is contributed by Manjeet Singh(S. Nandini). If you like GeeksforGeeks and would like to contribute, you can also write an article using write.geeksforgeeks.org or mail your article to review-team@geeksforgeeks.org. See your article appearing on the GeeksforGeeks main page and help other Geeks.
Please write comments if you find anything incorrect, or you want to share more information about the topic discussed above.