Python For loop is used for sequential traversal i.e. it is used for iterating over an iterable like String, Tuple, List, Set or Dictionary.

In Python, there is no C style for loop, i.e., for (i=0; i<n; i++). There is “for” loop which is similar to each loop in other languages. Let us learn how to use for in loop for sequential traversals

Note: In Python, for loops only implements the collection-based iteration.

Flowchart of for loop 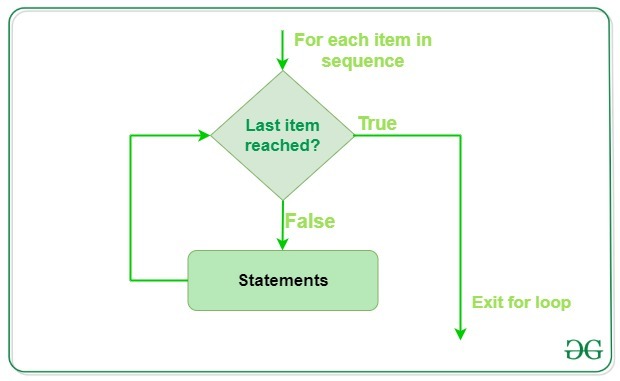 Here the iterable is a collection of objects like lists, tuples. The indented statements inside the for loops are executed once for each item in an iterable. The variable var takes the value of the next item of the iterable each time through the loop.

Examples of For Loops in Python

Python continue Statement returns the control to the beginning of the loop.

Python break statement brings control out of the loop.

The range() function is used to generate a sequence of numbers. Depending on how many arguments the user is passing to the function, user can decide where that series of numbers will begin and end as well as how big the difference will be between one number and the next.range() takes mainly three arguments.

For loop in Python with else

In most programming languages (C/C++, Java, etc), the use of else statements has been restricted with the if conditional statements. But Python also allows us to use the else condition with for loops.

Note: The else block just after for/while is executed only when the loop is NOT terminated by a break statement

Note: For more information refer to our Python for loop with else tutorial.

Previous
Chaining comparison operators in Python
Next
Python While Loop
Article Contributed By :