We are going to create a to-do list web API using Django rest framework, docker and also going to write different tests for different functionalities in our code using test-driven development, but let’s first see what are prerequisites for this project.

Now we are ready to go, let’s learn more about docker and Test-driven development (TDD) and why should we use them.

Docker is an open-source containerization platform for automating the deployment of applications as portable, self-sufficient containers that can run on the cloud or on-premises.

Consider a situation where a software engineer writes a code and sends it for testing but that code won’t run on the tester’s local environment because all dependencies are not fulfilled, this problem can be eliminated simply by using docker.

Test-Driven Development is a software development practice where the focus is on writing unit tests before writing actual code, it is an iterative approach that combines programming, the creation of unit tests, and refactoring.

Unit Test: Unit tests are the test for testing different functionalities in our code

Creating the project and Setting Up the Dockerfile:

Follow the below steps to create a project and set up the Dockerfile.

Run above command your docker image must be start building


Note: We are using version 3 of docker-compose and our app contains a service called app which is stored in a folder named app we will use port 8000 to run it using the above command.

Now that we have set up our project we can move to writing actual code but first let’s understand how to write tests in python Django.

Rules for Writing Tests in Django:

Following rules need to be followed while writing a Django test:

Follow the below steps to write the test for the task model:

Follow the below steps to create the task model:

Step 1: In our API app in models.py file include the below code:

Follow the below steps to write the test for API view:


Above we imported the required modules then we use the reverse function which allows retrieving URL details from urls.py file through the name-value provided there, then we created sample_payload which is a sample task model object creating sample functions that make our code clean and fast.


Above we have different unit tests for different views, first we create a class and extend it with TestCase and write a function to test different views (notice how every function name starts with test), override setup function from TestCase and use it to initialize class variables, then write code and perform require assertions to compare given output with the expected output.

Follow the below steps to write the API views and URLs:


Above is a view for creating a new task first we need to get data from the request and serialize it if serialized data is valid then simply save the serializer and return desired response.


Here we are completed with writing views.


Above are different URL patterns to make requests to different views and get a response.


Here if any URL starts from api/ then transfer control to api.urls. 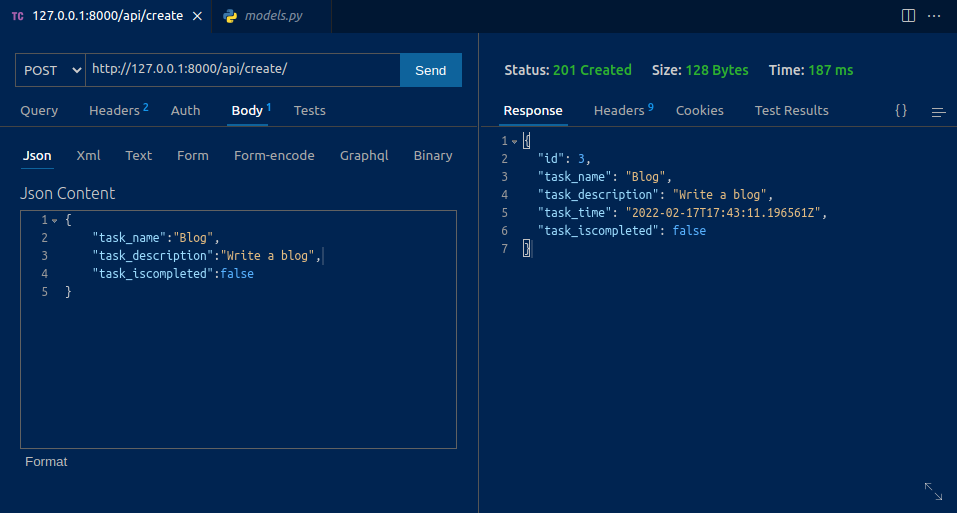 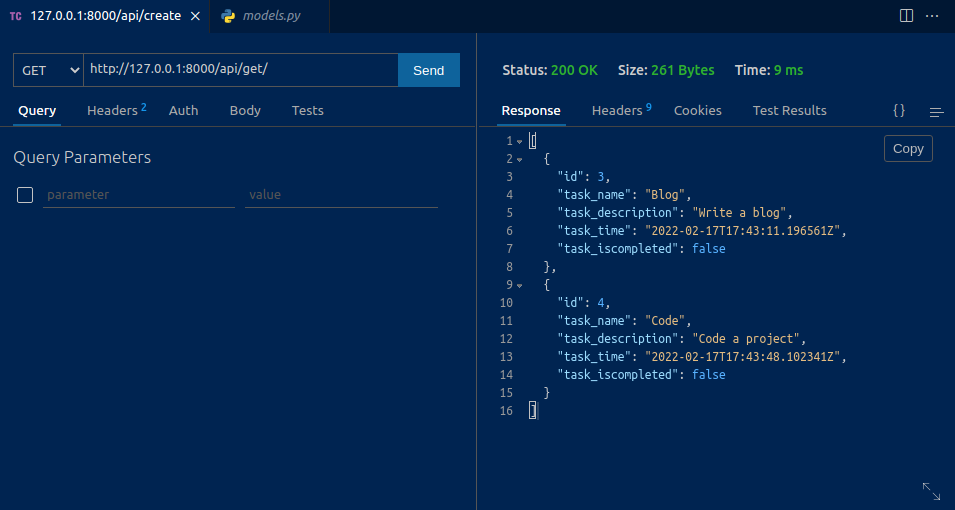 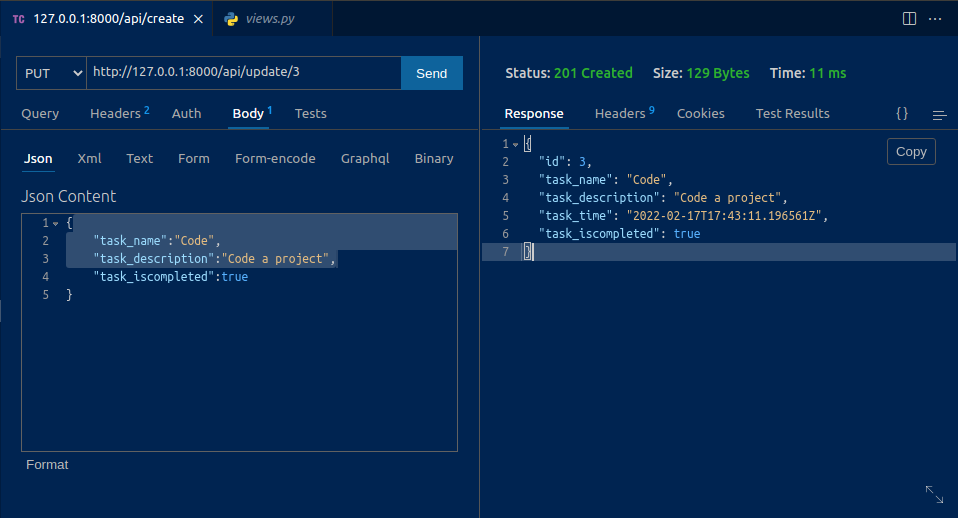 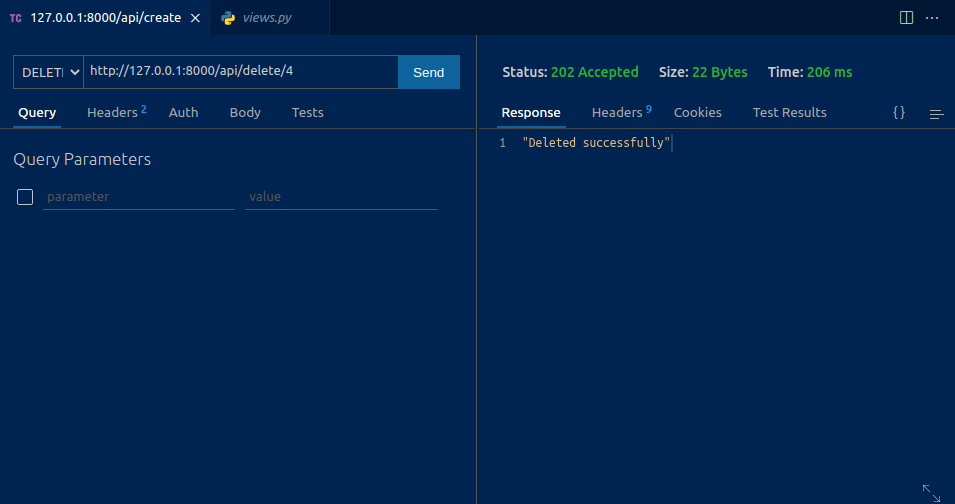 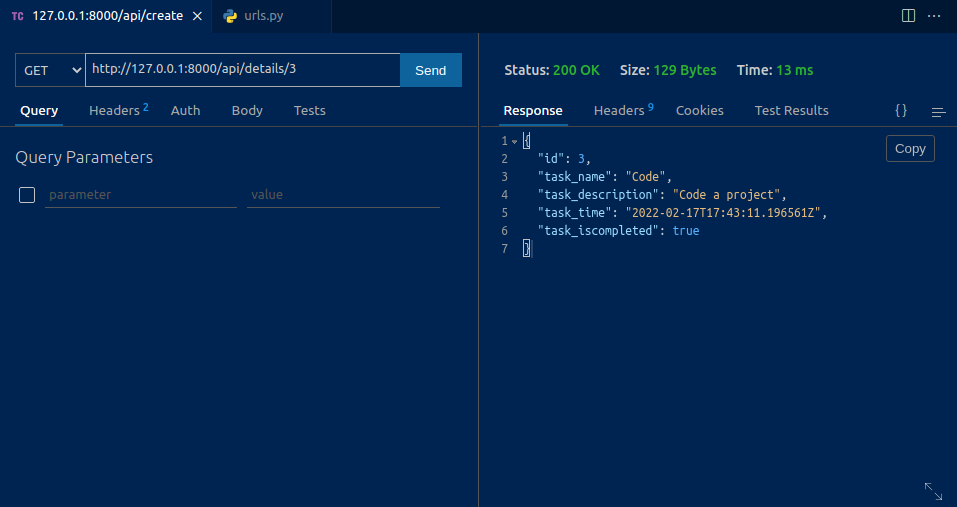 Thus we learned about creating API with Django rest framework, docker, and test-driven development. As the Software industry is growing so fast it is necessary to be updated with new technologies.