Lists in Python are linear containers used for storing data of various Data Types. The ability to store a variety of data is what makes Lists a very unique and vital Data Structure in Python.
Once created, lists can be modified further depending on one’s needs. Hence, they are ‘mutable.’
Lists, when created and by defining the values in the code-section, generates an output similar to this:
Code :

Also, the string-specific operations like string concatenation can be performed on the respective strings:
Code :


However, since we know that lists contain items of various data types those which might be of type: string, integer, float, tuple, dictionaries, or maybe even list themselves (a list of lists), the same is not valid if you are generating a list as a result of user input. For instance, consider the example below:
Code :

You may notice that List2 generated as a result of User Input, now contains values of string data-type only. Also, the numerical elements have now lost the ability to undergo arithmetic operations since they are of string data-type. This behaviour straightaway contradicts the versatile behavior of Lists.
It becomes necessary for us as programmers to process the user data and store it in the appropriate format so that operations and manipulations on the target data set become efficient.
In this approach, we shall distinguish data obtained from the user into three sections, namely integer, string, and float. For this, we use a small code to carry out the respective typecasting operations.
A technique to Overcome the proposed Limitation: 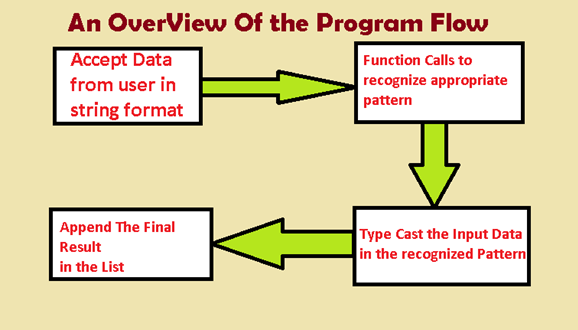 The above technique is essentially an algorithm which uses the Regular Expression library along with an algorithm to analyze the data-types of elements being inserted. After successfully analyzing the pattern of data, we then proceed to perform the type conversion.
For example, consider the following cases: 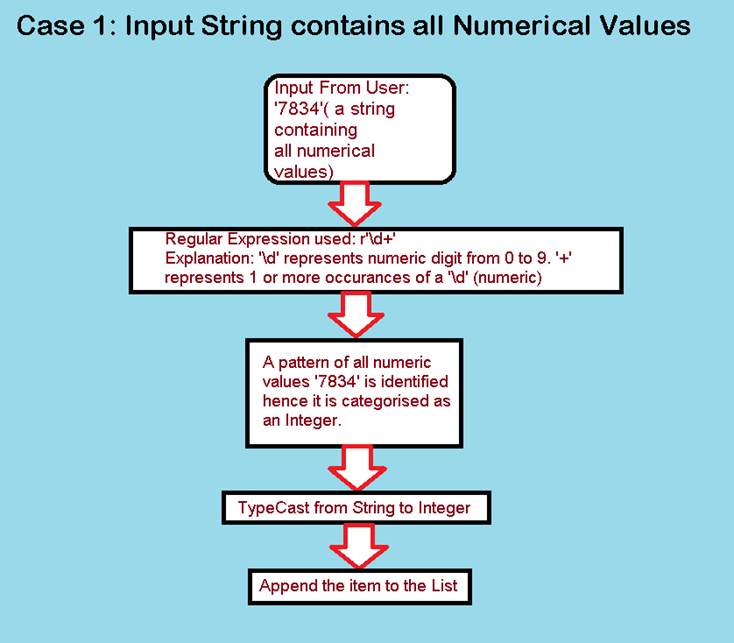 Conclusion: This method, however, is just a small prototype of typecasting values and processing raw data before storing it in the list. It definitely offers a fruitful outcome which overcomes the proposed limitations on list inputs. Further, with the advanced applications of regular expressions and some improvements in the algorithm, more forms of data such as tuples, dictionaries, etc. can be analysed and stored accordingly. 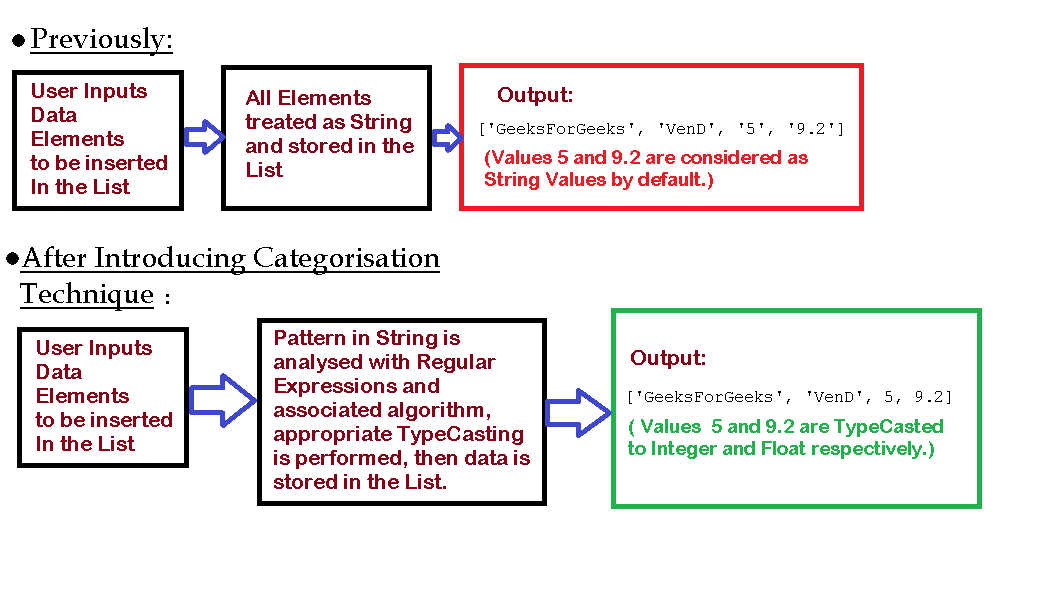 Advantages of the Dynamic TypeCasting:

Previous
InfyTQ 2019 : Find the position from where the parenthesis is not balanced
Next
Print all the peaks and troughs in an Array of Integers
Related Articles
1. Python - Convert Lists into Similar key value lists
2. How to Zip two lists of lists in Python?
3. Python | Program to count number of lists in a list of lists
4. Printing Lists as Tabular Data in Python
5. Python | Set 3 (Strings, Lists, Tuples, Iterations)
6. Creating a sorted merged list of two unsorted lists in Python
7. Python | Intersection of two lists
8. Python | Union of two or more Lists
9. Python | Split dictionary keys and values into separate lists
10. Python | Difference between two lists
Article Contributed By :