Python break is used to terminate the execution of the loop. 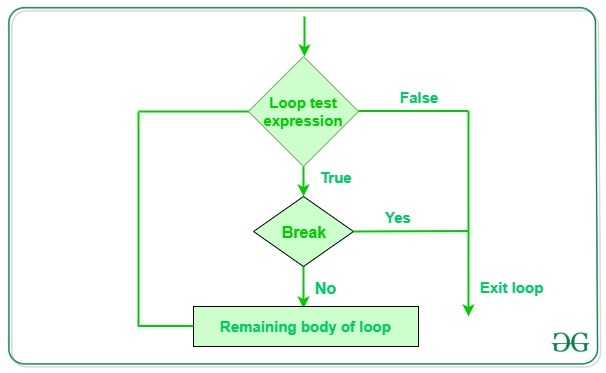 In the above example, both the loops are iterating the string ‘geeksforgeeks’ and as soon as they encounter the character ‘e’ or ‘s’, if the condition becomes true and the flow of execution is brought out of the loop.

In the above example, after iterating till num=7, the value of num will be 8 and the break is encountered so the flow of the execution is brought out of the loop.

Using loops in Python automates and repeats the tasks in an efficient manner. But sometimes, there may arise a condition where you want to exit the loop completely, skip an iteration or ignore some statements of the loop before continuing further in the loop. These can be done by loop control statements called jump statements. Loop control or jump statements change execution from its normal sequence. When execution leaves a scope, all automatic objects that were created in that scope are destroyed. Python supports the following control/jump statements.

Previous
Python While Loop
Next
Python Continue Statement
Related Articles
1. Loops and Control Statements (continue, break and pass) in Python
2. Break a long line into multiple lines in Python
3. Python | Group elements on break positions in list
4. break, continue and pass in Python
5. Create a Python Script Notifying to take a break
6. Working with Page Break - Python .docx Module
7. How to Break out of multiple loops in Python ?
8. Break a list into chunks of size N in Python
9. How to write an empty function in Python - pass statement?
10. Using Else Conditional Statement With For loop in Python
Article Contributed By :