Pumping Lemma in Theory of Computation

There are two Pumping Lemmas, which are defined for 1. Regular Languages, and 2. Context – Free Languages   Pumping Lemma for Regular Languages For any regular language L, there exists an integer n, such that for all x ∈ L with |x| ≥ n, there exists u, v, w ∈ Σ*, such that x = uvw, and (1) |uv| ≤ n (2) |v| ≥ 1 (3) for all i ≥ 0: uviw ∈ L   In simple terms, this means that if a string v is ‘pumped’, i.e., if v is inserted any number of times, the resultant string still remains in L.   Pumping Lemma is used as a proof for irregularity of a language. Thus, if a language is regular, it always satisfies pumping lemma. If there exists at least one string made from pumping which is not in L, then L is surely not regular. The opposite of this may not always be true. That is, if Pumping Lemma holds, it does not mean that the language is regular.

Pumping Lemma for Context-free Languages (CFL) Pumping Lemma for CFL states that for any Context Free Language L, it is possible to find two substrings that can be ‘pumped’ any number of times and still be in the same language. For any language L, we break its strings into five parts and pump second and fourth substring. Pumping Lemma, here also, is used as a tool to prove that a language is not CFL. Because, if any one string does not satisfy its conditions, then the language is not CFL. Thus, if L is a CFL, there exists an integer n, such that for all x ∈ L with |x| ≥ n, there exists u, v, w, x, y ∈ Σ*, such that x = uvwxy, and (1) |vwx| ≤ n (2) |vx| ≥ 1 (3) for all i ≥ 0: uviwxiy ∈ L 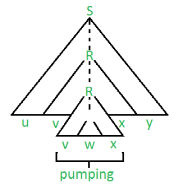 This article has been contributed by Nirupam Singh.    Please write comments if you find anything incorrect, or if you want to share more information about the topic discussed above.