The OSI model, which was first introduced by the International Organization for Standardization (ISO) in 1977, is a reference that specifies the transferring of data from one computer to another computer. The layered stack of the OSI (Open System Interconnection) reference model is made up of seven layers and each has a specific communication purpose to ensure reliable data flow between computers.

The goal of following the approach of the layered stack in the framework is to make network application and hardware development, management, and troubleshooting more specified and straightforward. Each layer is independent and self-contained so that it can carry out its communication tasks. The OSI model’s application layer is at the top, while the physical layer is at the bottom as shown below.

Each layer’s information is referred to as a Protocol Data Unit (PDU). Along with the data, it contains protocol-specific control information. Each layer will add (or delete) its protocol information as a PDU moves down (or up) each layer. The PDU is given a different name at each layer to represent its role. So, in a computer network, it refers to a block of information that is transferred between network end systems. As the name implies, it is used for Open System Interconnection (OSI) model since it varies with layer-specific protocols and conventions. In a protocol stack, different layers have different types of data to be transferred.

There are seven layers in the OSI Model as shown below and in the whole process of transferring information between these layers, only data goes through changes. Below mentioned are the layers of the OSI Model:

Note: Layer 5 and above, the PDU is referred to as data. 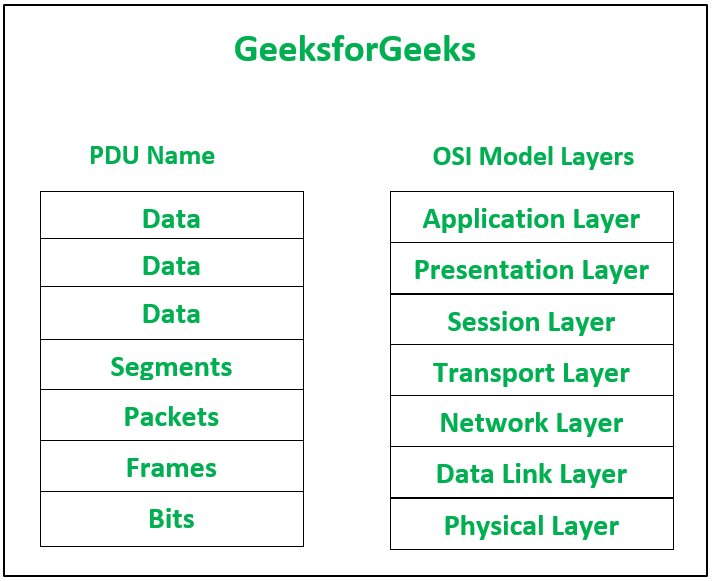 When one PDU is wrapped inside another PDU then it is referred to as Encapsulation. It generally occurs when one protocol data unit (PDU) is transported inside the data field of the lower protocol data unit (PDU). In other words, a PDU contains data comprising relevant lower layer header information and is received from an upper network layer. This information has been prepared for transmission to the next lower layer in a row i.e. network layer. As data flows from one layer to the next, the PDU identifies its state. The major difference between Protocol Data Unit (PDU) and Service Data Unit (SDU) lies in the encapsulation as Service Data Units have not been able to encapsulate lower layer data transmission yet.

The following table illustrates the PDU of each protocol stack layer.