Waves are everywhere around us in real life, from the ripples that are created in water when throwing stones to the phones that are working around us. All these phenomena are happening because of waves. The waves are nothing but a disturbance in the medium they are traveling. It is essential to study their nature and properties to be able to predict their behavior in the places where their applications are needed. These properties also help us in predicting the resultant wave which originates when two or more waves in the medium meet. Let’s see these in detail.

Wave is a disturbance in a medium that carries energy in them. For propagation, waves use elastic deformation, a variation of pressure or temperature, etc to propagate in the medium. It is not always necessary that all waves will require a medium for propagation, light waves can travel in a vacuum. Based on the way in which these waves travel in a medium, they can be classified into two types of waves – Longitudinal and Transverse waves. 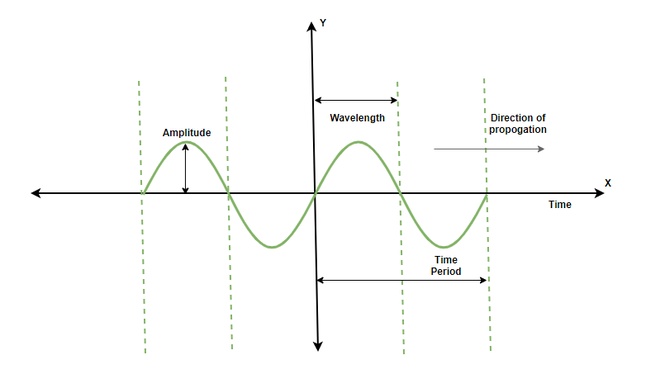 A Wavelength is defined as the minimum distance covered by the Wave before it starts repeating itself. The wavelength is actually a length parameter, hence, the SI unit of wavelength meters. The sound wave is longitude in nature, and the combination of the distance of one complete rarefaction and compression gives wavelength. The symbol for the wavelength used is λ. 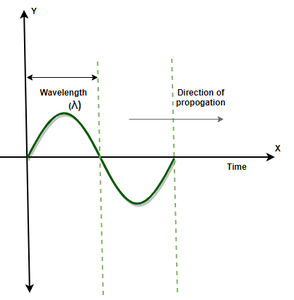 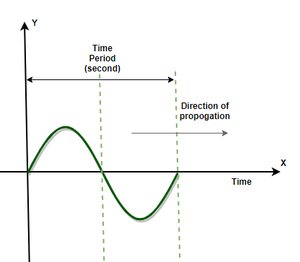 An example of the frequency of the wave is, 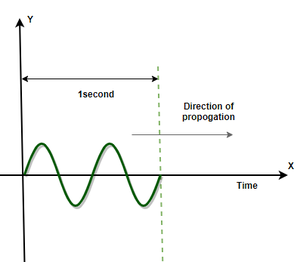 Formula to find out the frequency of the wave,

Equation of a Wave

Notice that all these waves are in the form sinusoidal form. Thus, their equation also reflects the nature of a sinusoidal function. The function includes both the time “t” and the position “x”. For convenience let’s assume that the wave is transverse in nature. Denoting the displacement of the medium particles by “y”. The equation of the wave will be given by,

The velocity of a wave is given as,

Hence, the wavelength of this wave is 15 meters.

Hence, the velocity of both the waves are equal.

Question 3: Find the amplitude and velocity of the wave whose equation is given below.

The equation of general wave is given by,

Question 4: Find the amplitude and velocity of the wave whose equation is given below.

The equation of general wave is given by,

Question 5: The Time period of a wave is given as 10 milliseconds. What will be the frequency of this wave?

As the formula known for the frequency of the wave is,

Question 6: Two waves having Frequencies of 20Hz and 100Hz are given. Which wave has more Time period?

The Time period for the first wave = 1/frequency

The Time period for the second wave= 1/frequency