Propan-2-Ol belongs to the family of alcohols, it can be said easily because of the Ol in the name. It is basically secondary alcohol, in which the OH group is attached to the carbon atom only with one hydrogen present. Let’s take a look at the structure, properties, and uses of this secondary alcohol.

The IUPAC name of isopropyl alcohol. It is the simplest secondary alcohol, as an isopropyl group linked with a hydroxyl group. 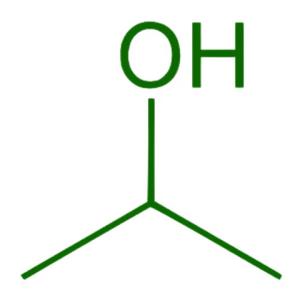 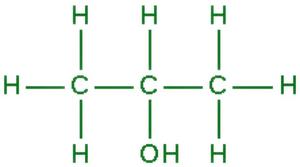 Very less amount of propan-2-ol is produced by the diabetic ketoacidosis process.

This process can use low-quality propene. These processes give primarily propan-2-ol i.e. secondary alcohol rather than 1-propanol i.e. primary alcohol because adding water or sulfuric acid to propene follows Markovnikov’s rule.

Propan-2-Ol  is oxidized by chromic acid (H2CrO4) and formed acetone. It is a dehydrogenation process.

It is formed 2-bromopropane by using phosphorus tribromide.

Propan-2-Ol is often used as both solvent and hydride source in the Meerwein-Ponndorf-Verley reduction and other transfer hydrogenation reactions.

Question 1: What is the structural difference between propanol and propan-2-ol?

Question 3: What is the main mechanism of the oxidation reaction of propan-2-ol?

In the oxidation reaction, propan-2-ol reacts with oxidizing agent and forms propan-2-one. Here basically secondary alcohol like propan-2-ol is oxidized into ketone.  In the sodium, potassium dichromate solution with sulfuric acid or chromic acid gives propan-2-one with a chromium compound. And the hydrogen molecule of secondary carbon and hydroxyl group form water with the [O] of an oxidizing agent. After the removal of two hydrogen molecules, it generates ketone.

Question 4: What is Markovnikov’s rule?

Question 5: How is Markovnikov’s rule implemented in the production of propan-2-ol?

Question 6: Why propan-2-ol is commonly used as a solvent?

Propan-2-ol dissolves a wide range of non-polar compounds. It evaporates quickly and the types of available grades tend to not leave behind oil traces when used as a cleaning fluid, unlike some other common solvents. It is also relatively non-toxic. Thus, it is used widely as a solvent.

Question 7: Write down a simple example of a positional isomer of a three-carbon molecule with an alcohol group.

Propan-1-ol and propan-2-ol are the positional isomers that have the same molecular formula but differ from the position of the -OH group.