Proof that Hamiltonian Path is NP-Complete

To prove HAMPATH is NP-Complete we have to prove that HAMPATH is in NP. To prove HAMPATH is in NP we must have a polynomial-time verifier. Even though we don’t have a fast polynomial time algorithm to determine whether a graph contains a HAMPATH or not, if such a path is discovered somehow (maybe with exponential time brute force searching) we could easily-work it out whether the path is HAMPATH or not, in polynomial time. Here the certificate will be a Hamiltonian path from s to t itself in G if exists. So HAMPATH is in NP proved. So, now we have to show that every problem to NP class is polynomial time reducible to HAMPATH to show its NP-Completeness. Rather we shall show 3SAT (A NP-Complete problem proved previously from SAT(Circuit Satisfiability Problem)) is polynomial time reducible to HAMPATH. We will convert a given cnf (Conjunctive Normal Form) form to a graph where gadgets (structure to simulate variables and clauses) will mimic the variables and clauses (several literals or variables connected with

For each 3-cnf formula

we will show how to build graph G with s and t, where a Hamiltonian path exists between s and t iff

is satisfiable. We start with a 3-cnf formula

be the l variables of

.Now we show how to convert

to a graph G. The graph G that we construct has various parts to represent the variables and clauses that appear in

. We represent each variable

with a diamond-shaped structure that contains a horizontal row of nodes as shown in following figure. We specify the number of nodes that appear in the horizontal row later. 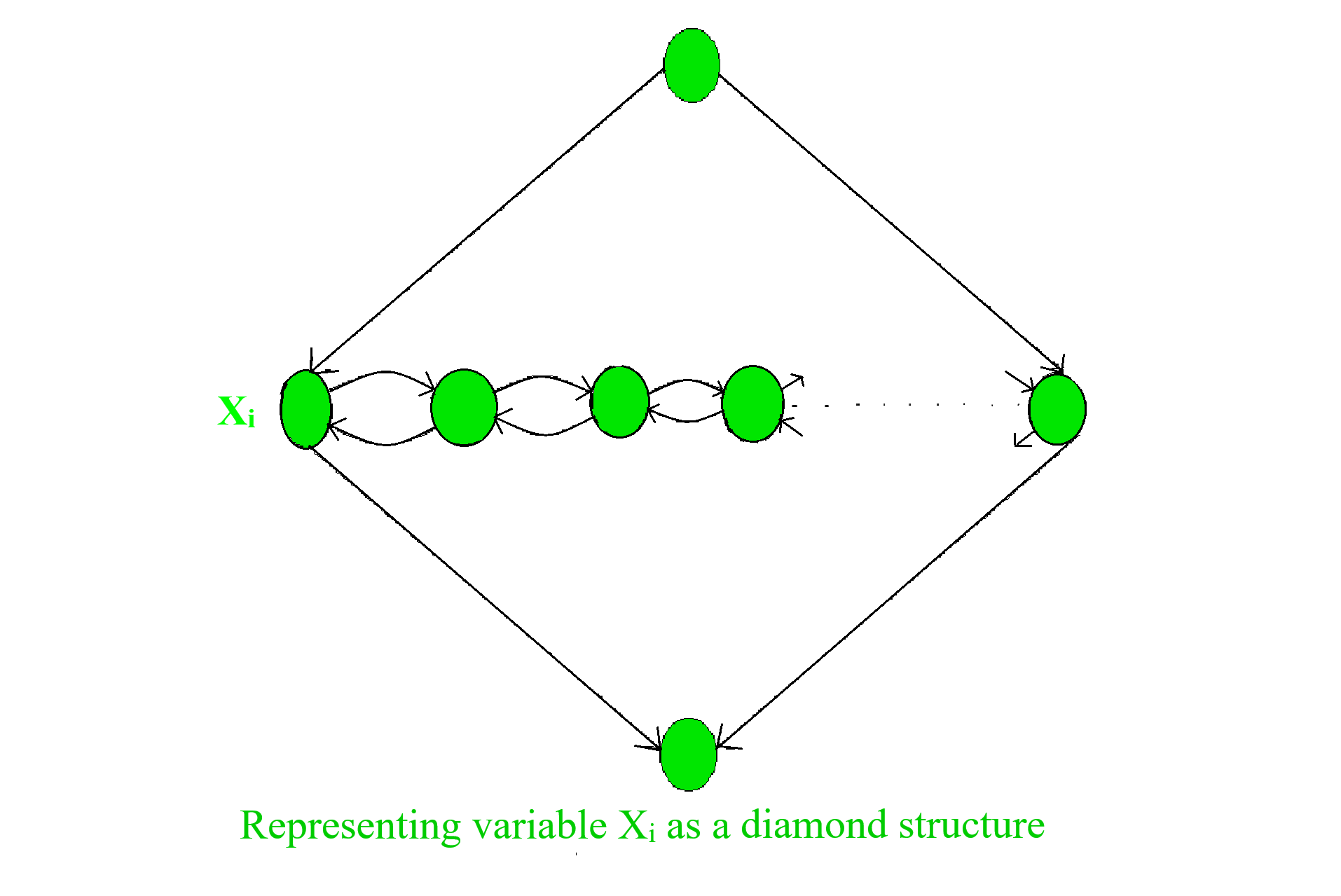 The following figure depicts the global structure of G. It shows all the elements of G and their relationships, except the edges that represent the relationship of the variables to the clauses that contain them. 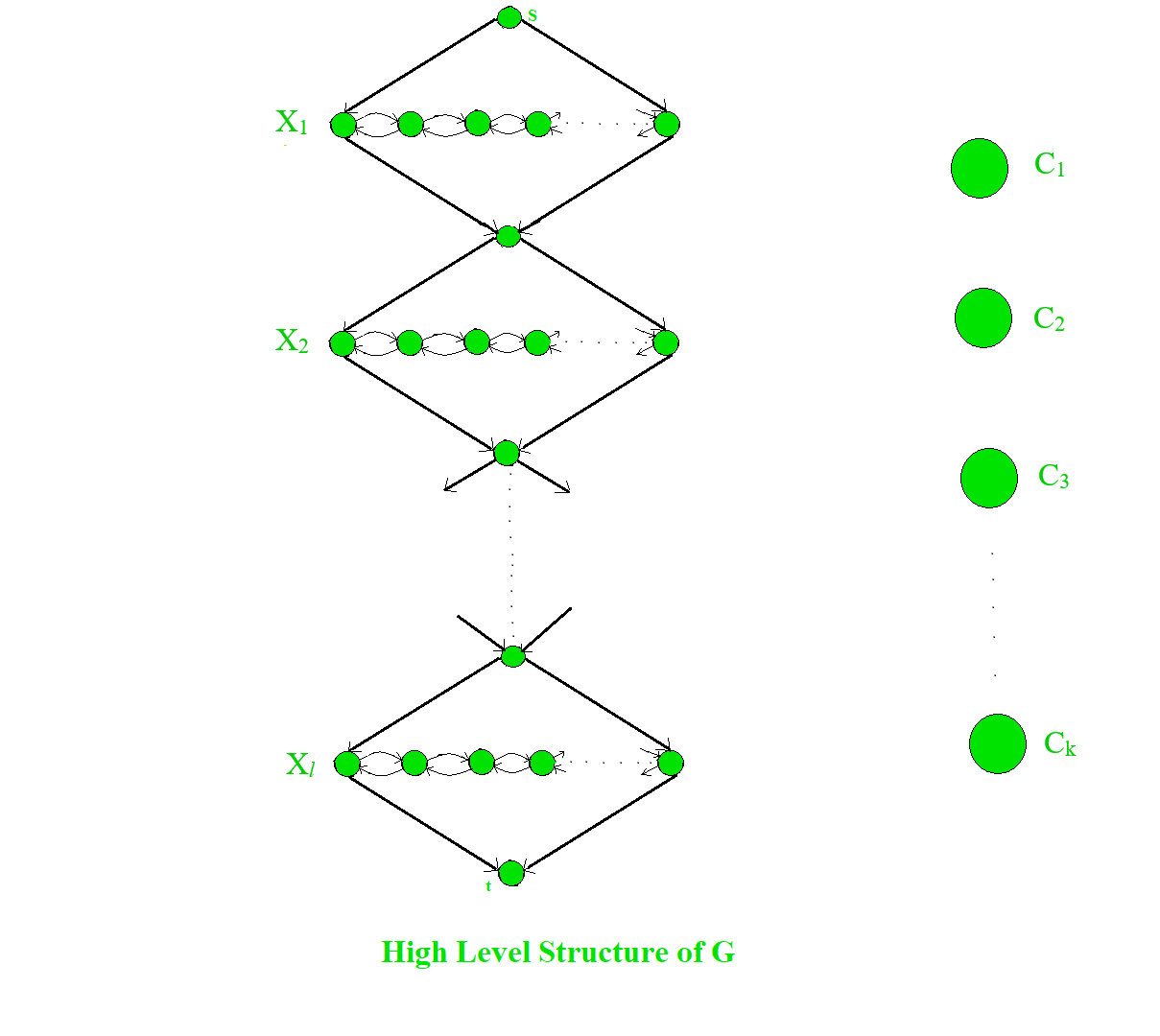 Each diamond structure contains a horizontal row of nodes connected by edges running in both directions. The horizontal row contains 2k nodes (as 2 nodes for each clause) plus, k-1 extra nodes in between every two nodes for a clause plus, 2 nodes on the ends belonging to the diamonds; total 3k+1 nodes. Following diagram gives a clear picture.

, we add the following two edges from the jth pair in the ith diamond to the jth clause node.

appears in clause c_j, we add two edges from the jth pair in the ith diamond to the jth clause node, as in the following figure.

After we add all the edges corresponding to each occurrence of

in each clause, the construction of G is complete. To show its correctness we will prove if

is satisfiable, a Hamiltonian path exists from s to t and conversely, if such a path exists

is satisfiable. Suppose that

is satisfiable. To demonstrate a Hamiltonian path from s to t, we first ignore the clause nodes. The path begins at s, goes through each diamond in turn and ends up at t. To hit horizontal nodes in a diamond. the path either zig-zags from left to right or zag-zigs from right to left; the satisfying assignment to

is assigned TRUE or FALSE respectively. We show both cases in the following figure.

So far this path covers all the nodes in G except the clause nodes. We can easily include them by adding detours at the horizontal nodes. In each clause, we select one of the literals assigned TRUE, by satisfying assignment. If we selected

, we can detour at the jth pair in the ith diamond. Doing so is possible because

must be TRUE, so the path zig-zags from left to right through the corresponding diamond. Hence the edges to the

node are in the correct order to allow a detour and return. Similarly, if we selected

, we can detour at the jth pair in the ith diamond because

must be FALSE, so the path zag-zigs from right to left through the corresponding diamond. Hence the edges to he

node are again in the correct order to allow a detour and return. Every time one detour is taken if each literal in clause provides an option for detour. Thus each node is visited exactly once and thus Hamiltonian Path is constructed. For the reverse direction, if G has a Hamiltonian path from s to t, we demonstrate a satisfying assignment for

. If the Hamiltonian path is normal i.e. it goes through diamonds in order from top to bottom node except the detour for the closure nodes; we can easily obtain the satisfying assignment. If the path zig-zags in diamond we assign the variables as TRUE and if it zag-zigs then assign it FALSE. Because every node appears on the path by observing how the detour is taken we may determine corresponding TRUE variables. All that remains to be shown that Hamiltonian path must be normal means the path enters a clause from one diamond but returns to another like in the following figure. 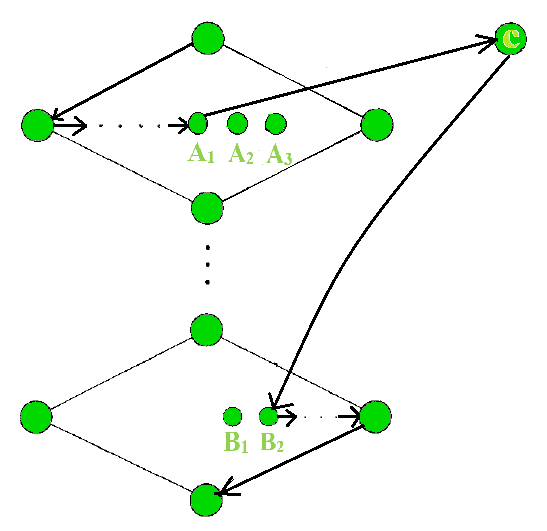 The path goes from node

to c; but instead of returning to

in the same diamond, it returns to

in the different diamond. If that occurs then either

must be a separator node. If

were a separator node, the only edges entering in

were a separator node then

would be in same clause, then edges that enters

and c. In either case path cannot enter

is only available node that

points at, so path must exit

. Hence Hamiltonian path must be normal. This reduction obviously operates in polynomial time and hence the proof is complete that HAMPATH is NP-Complete.