Introduction:
The basic idea behind this project is to create a simple stand-alone application
that helps less tech savvy people in the world to use the computer without feeling ignorant or computer illiterate.
Computers have became a very important devices and as well as less expensive over time.
The application works same like Siri/ Google Assistant etc. But the application deals with the computer itself mainly.
The U.I of the application is self-explanatory and minimal.
Currently it takes text as input as most of the people are not very good at speaking.

Constraints:
The application was built on and for an apple MacBook thus restricting it to the macOS alone. Acolyte is compatible with all the versions of the Apple macOS.
The system also assumes that the user has minimal english knowledge as of now.

There is always scope for improvement. So the application was built using M.V.C architecture, incremental process design. These design structures follow the modular approach which makes it easy to add in new features to the system.

The system also implements the singleton pattern and the single responsibility principle which ensure the individual functioning of the modules.

Functions:
The system provides all the below stated functions.

-displaying system information such as network usage, ram etc.
-opening and closing an application
-altering system brightness, volume
-accessing bluetooth, WIFI
-bookmarking a webpage
-creating a new window or a tab in browser
-going to the previous webpage on the web browser
-reloading a webpage on the web browser
-keylogging with keystrokes segregated according to the application and time stamps.
-browser history tracking

Diagrams:
UML Diagrams:
Use Case Diagram:
A use case is a set of scenarios that describe an interaction between a user and a system.  A use case diagram displays the relationship among actors and use cases.  The two main components of a use case diagram are use cases and actors. 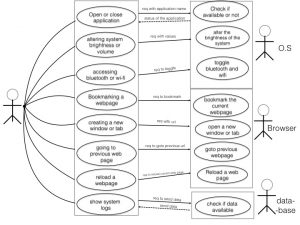 Activity Diagram:
Activity diagram is basically a flowchart to represent the flow from one activity to another activity. The activity can be described as an operation of the system.The control flow is drawn from one operation to another. This flow can be sequential, branched, or concurrent. Activity diagrams deal with all type of flow control by using different elements such as fork, join, etc 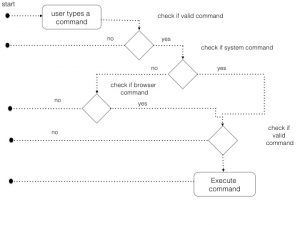 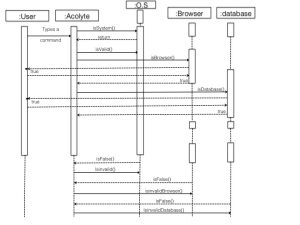 Algorithms:
Most of the algorithms used are custom designed, analysed and tested extensively for the project. We created most of them from scratch to make it as fast as possible.
The one which we have used as it is Naive Bayes theorem. 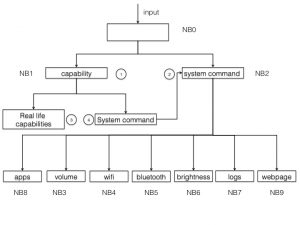 Tools Used:
The project was mainly built using the Swift programming language from scratch according to the required functionalities to attain lightning speed and smooth execution. Some functionalities of the system had to be written in the obj-c and the scripting language AppleScript. The application uses the standard SQLite3 as the database.
The key logger we wrote is published in GitHub.

Application:
Acolyte was built to help the people with limited computer knowledge but it is also important to note that the other class of users might find some specific functionalities such as system logging useful.

The people who are not familiar getting around on their own on a computer can use this application as it abstracts away all the steps and presents only most important. Like they can just say to connect to a particular wifi or bluetooth, it will connect. Want to decrease screen brightness or volume? Want to open and close an application, file? Just say it as you would to a person, it will do the work for you.

Many parents are afraid about what their child is surfing in the internet. The application can notify their parents about the activity. Even if the child deletes all the history or uses incognito mode etc. The application logs every keystroke and website used by the child. Don’t worry as they wont leave any trace while running. It completely hides and doesn’t require any permissions to run.

It can also help with getting around web by opening, closing, bookmarking, reload, back, next etc a webpage just by saying it to do so.
*Data extraction and interacting with a webpage elements/nodes is still under working.