Program to find Length of Latus Rectum of an Ellipse

Given two integers A and B, representing the length of semi-major and semi-minor axis of an Ellipse with general equation (x2 / A2) + (y2 / B2) = 1, the task is to find the length of the latus rectum of the ellipse 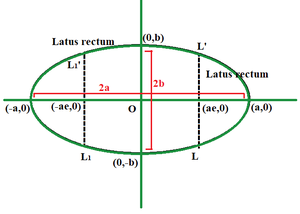 Follow the steps below to solve the given problem: