The shortest job first (SJF) or shortest job next, is a scheduling policy that selects the waiting process with the smallest execution time to execute next. SJN, also known as Shortest Job Next (SJN), can be preemptive or non-preemptive. 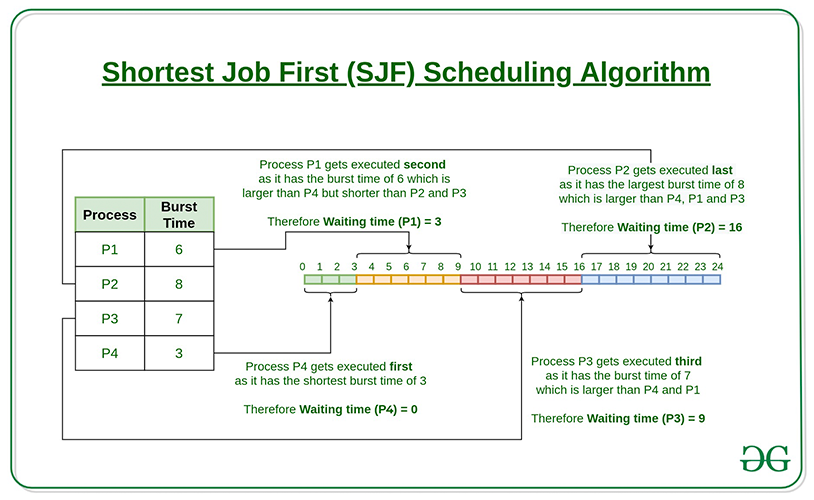 How to compute below times in SJF using a program?

In this post, we have assumed arrival times as 0, so turn around and completion times are same.

The Shortest Job First CPU Scheduling Algorithm will work on the basis of steps as mentioned below:

Gantt chart for above execution:

Now, let’s calculate the average waiting time for above example:

Implementation of SJF Algorithm in C


Note: In this post, we have assumed arrival times as 0, so turn around and completion times are same.

In Set-2 we will discuss the preemptive version of SJF i.e. Shortest Remaining Time First

This article is contributed by Mahesh Kumar(NCE, Chandi). If you like GeeksforGeeks and would like to contribute, you can also write an article using write.geeksforgeeks.org or mail your article to review-team@geeksforgeeks.org. See your article appearing on the GeeksforGeeks main page and help other Geeks.
Please write comments if you find anything incorrect, or you want to share more information about the topic discussed above.