Introduction :
Presentation Layer is the 6th layer in the Open System Interconnection (OSI) model. This layer is also known as Translation layer, as this layer serves as a data translator for the network. The data which this layer receives from the Application Layer is extracted and manipulated here as pert the required format to transmit over the network. The main responsibility of this layer is to provide or define the data format and encryption. The presentation layer is also called as Syntax layer since it is responsible for maintaining the proper syntax of the data which it either receives or transmits to other layer(s). 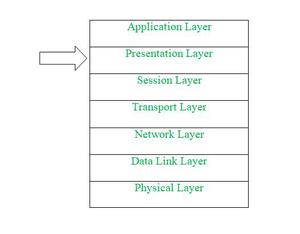 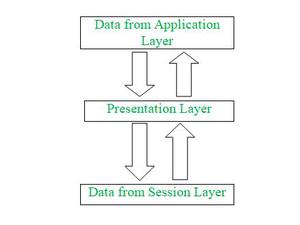 The presentation layer, being the 6th layer in the OSI model, performs several types of functions, which are described below-

List of features which are provided by the presentation layer are  –

Working of Presentation Layer in the OSI model :
Presentation layer in the OSI model, as a translator, converts the data sent by the application layer of the transmitting node into an acceptable and compatible data format based on the applicable network protocol and architecture.  Upon arrival at the receiving computer, the presentation layer translates data into an acceptable format usable by the application layer. Basically, in other words, this layer takes care of any issues occurring when transmitted data must be viewed in a format different from the original format. Being the functional part of the OSI mode, the presentation layer performs a multitude (large number of) data conversion algorithms and character translation functions. Mainly, this layer is responsible for managing two network characteristics: protocol (set of rules) and architecture.

Presentation Layer Protocols :
Presentation layer being the 6th layer, but the most important layer in the OSI model performs several types of functionalities, which makes sure that data which is being transferred or received should be accurate or clear to all the devices which are there in a closed network.
Presentation Layer, for performing translations or other specified functions, needs to use certain protocols which are defined below –