Practical Byzantine Fault Tolerance is a consensus algorithm introduced in the late 90s by Barbara Liskov and Miguel Castro. pBFT was designed to work efficiently in asynchronous(no upper bound on when the response to the request will be received) systems. It is optimized for low overhead time. Its goal was to solve many problems associated with already available Byzantine Fault Tolerance solutions. Application areas include distributed computing and blockchain.

What is Byzantine Fault Tolerance?
Byzantine Fault Tolerance(BFT) is the feature of a distributed network to reach consensus(agreement on the same value) even when some of the nodes in the network fail to respond or respond with incorrect information. The objective of a BFT mechanism is to safeguard against the system failures by employing collective decision making(both – correct and faulty nodes) which aims to reduce to influence of the faulty nodes. BFT is derived from Byzantine Generals’ Problem.

Byzantine Generals’ Problem
The problem was explained aptly in a paper by LESLIE LAMPORT, ROBERT SHOSTAK, and MARSHALL PEASE at Microsoft Research in 1982:

Byzantine fault tolerance can be achieved if the correctly working nodes in the network reach an agreement on their values. There can be a default vote value given to missing messages i.e., we can assume that the message from a particular node is ‘faulty’ if the message is not received within a certain time limit. Furthermore, we can also assign a default response if the majority of nodes respond with a correct value.

Leslie Lamport proved that if we have 3m+1 correctly working processors, a consensus(agreement on same state) can be reached if atmost m processors are faulty which means that strictly more than two-thirds of the total number of processors should be honest.

Types of Byzantine Failures:
There are two categories of failures that are considered. One is fail-stop(in which the node fails and stops operating) and other is arbitrary-node failure. Some of the arbitrary node failures are given below :

How pBFT works ?
pBFT tries to provide a practical Byzantine state machine replication that can work even when malicious nodes are operating in the system.
Nodes in a pBFT enabled distributed system are sequentially ordered with one node being the primary(or the leader node) and others referred to as secondary(or the backup nodes). Note here that any eligible node in the system can become the primary by transitioning from secondary to primary(typically, in the case of a primary node failure). The goal is that all honest nodes help in reaching a consensus regarding the state of the system using the majority rule.
A practical Byzantine Fault Tolerant system can function on the condition that the maximum number of malicious nodes must not be greater than or equal to one-third of all the nodes in the system. As the number of nodes increase, the system becomes more secure.

pBFT consensus rounds are broken into 4 phases(refer with the image below): 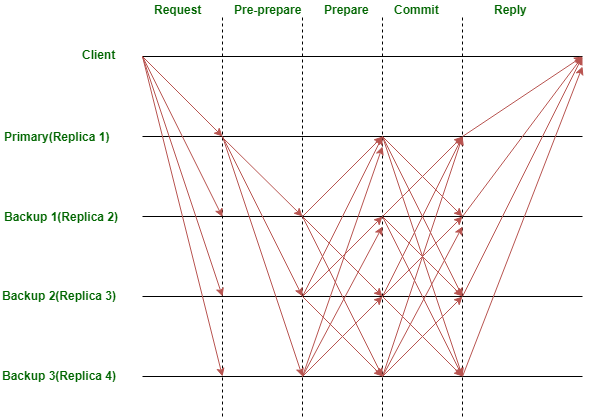 The primary(leader) node is changed during every view(pBFT consensus rounds) and can be substituted by a view change protocol if a predefined quantity of time has passed without the leading node broadcasting a request to the backups(secondary). If needed, a majority of the honest nodes can vote on the legitimacy of the current leading node and replace it with the next leading node in line.

Limitations of pBFT:
The pBFT consensus model works efficiently only when the number of nodes in the distributed network is small due to the high communication overhead that increases exponentially with every extra node in the network.

Variations of pBFT:
To enhance the quality and performance of pBFT for specific use cases and conditions, many variations were proposed and employed. Some of them are :